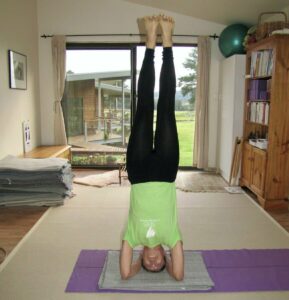 Many of us are getting to the age where we are starting to wear out. Or, at least our joints are. Over the last few weeks, I’ve spoken to three people who are in need of hip replacements. All of them are yogis. All are active in life, and this deterioration of their joints limits them in the things they love to do. Naturally enough, people are fearful about submitting to orthopaedic surgery. They dread the pain to come and the expense of major surgery.

Hip surgery is a daunting prospect for anyone. Fortunately, the first suggestion of the surgical option usually comes well before the actual operation. You have time to get used to the idea. Nevertheless, a visit to the orthopaedic surgeon starts to shape your thinking towards the inevitable. This is especially true when the levels of pain and physical limitations are increasing.

If like me, you try to find natural ways of dealing with health issues, surgical intervention is scary in the extreme. I am now twelve years post double hip surgery. My artificial hips have given me my life back. I’m indebted to modern technology and to the highly skilled surgeon who did my operation.

Yoga practitioners who are due for a hip replacement will have to make some sacrifices before life becomes all sunshine and roses again. In the lead-up to surgery, you are likely to have been in discomfort, developed a limp and become limited in many activities.

The poses that you formerly preformed with ease may have become inaccessible. If you had a strong practice, you need to adapt to gentler and more reflective yoga routines. Making such changes takes humility and dedication to self-care. Yet these are often the very qualities that wane when we are in pain.

If you are an independent person, you will need to become reliant on others, both before and after surgery. That’s just a given. I found it difficult to ask for support. But asking for help became one of the most transformative “gifts” from the experience. You know those kinds of gifts where you say, ah, you shouldn’t have.

As you may have done already, I surfed the internet to see what types of surgery were available. As well, I looked at all sorts of prostheses. I came to realise that I had no idea what was best. The amount of information that is available is staggering. You could even watch an entire surgery on-line (I didn’t). Rather than relying on Dr. Google, I trusted the surgeon I chose and simply followed his advice. When you get right down to it, the orthopaedic surgeon you choose is the expert.

If you’re curious about the kind of surgery I underwent, it’s called a posterior hip replacement. Ceramic linings and titanium devices were installed to replace the parts that had worn out. My orthopaedic surgeon told me these would give me strength and durability for restoring the mobility and balance I’d lost.

Your yoga life after surgery

When quizzed about my post-op rehabilitation, I’m invariably asked if I can do everything I used to do. Absolutely not! For one thing, I started yoga when I was 27, and I’m fifty years old. So, I am limited compared in the range of movement I now have. For a hyper-mobile body type like mine, I needed to learn to make my hips stronger and more stable. Most yoga students need to work on strength and stability rather than cultivating ultra-flexibility.

I returned to teaching yoga four months post-surgery and took it slowly to recover and rehabilitate. When I had my five-year check-up, my surgeon was pleased with my progress. He even asked if he could have access to some of my published writing to share with his patients who are yoga practitioners.

The cost of the operation and subsequent physiotherapy can be considerable. On top of the costs associated with surgery, you need to take some weeks off work for a full recovery. But this is an investment in your future – not something to economise on. Time off could even be viewed as a personal retreat for a yogi.

I want to share a power point presentationI created last year that includes photos of the poses I found that were soothing and helpful pre-op. You’ll also find images of the postures I did post-op as my range of movement was slowly restored. Typically for me, I couldn’t resist including some show-offy pix as well, two taken before the hip surgery and then one of me 7 months post-op on a slack rope at the Nevada Burning Man Festival.

Over the years I’ve received emails and phone calls from teachers and students who are thinking about undergoing hip replacement surgery. If you are considering the operation or know of someone who is, I’m happy to have them contact me via ‘Yoga with Eve Grzybowski’.