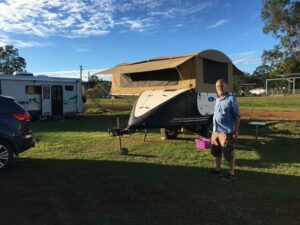 The Ultimate Camper Trailer and Daniel the ultimate camper

So I came up with an idea: a daily ritual whereby Daniel and I chronicle each previous day–highlights and lowlights, too. Rather than putting pen to paper, so yesterday, we are making short sound clips.

When my clever husband can figure out the next stage, a video log, we will then dazzle you with film of remote Australia. 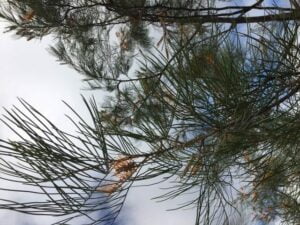 Grevillea from Minnamoolka district of Queensland

This inaugural recording tells of our stay at a genuine cattle station near Mt Surprise, Queensland, called Pindarendi. Like many small towns and property owners, our hosts are capitalising on providing basic accommodation for the stream of grey nomads rolling through the warm north.

Also, you’ll hear Daniel talk about the lava tubes of the Undara Volcanic Park. Typical of travellers to unusual places, we are throwing ourselves into seeing what there is to see. Now I know what a lava tube is and how it is formed. More importantly, I have a greater appreciation for the exoticness of hitherto unexplored parts of Australia. If you like, check the tubes out.