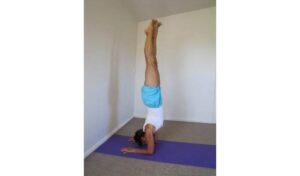 I’m sometimes embarrassed to say that I do weights workouts a couple of times a week. I guess I perceive that, in the yoga world, the tools of the practice are meant to cater to the care and keeping of our body/minds on every level. We don’t necessarily need the gym.
I suppose if I did enough handstands, forearm balances, dog poses, and chaturangas, those poses would make my bones healthy and strong. But I don’t do them a lot. Or maybe, if I had access to the part of my mind that could lay down new bone cells by dint of clear and powerful thinking, I might stop the inexorable march of bone loss.
I admit I like weight training. I do it in the Yoga Shed a couple of days a week, with the mini-arsenal of free weights that I’ve collected. I feel strong from my efforts, although occasionally I’ll sustain an injury and then have to back off, and sometimes build up weight levels gradually all over again.
I’ve read that about 15% of women in their fifties are affected by bone density loss in their vulnerable menopausal time. Then, by the time they are in their eighties, about 50% of women have experienced bone loss.
So far my test scores show that I am doing well in the density stakes. I am in one of the highest risk groups for osteoporosis – a slightly built woman. The top others are smokers and drinkers. How unfair is that?
One thing about hanging on to the bone mass you have as you age, it’s not that hard if you are reasonably healthy and are genetically favoured. Just do exercise.
To build bone mass with yoga and other exercise, exercise must be done consistently – at least 30 minutes a day, five days a week. Calcium supplements are good, as long as you also get your Vitamin D needs met, that is, 15 to 20 minutes in the sun three or four times a week. However, exercise works better than calcium in building bones.
Weights, while not a spiritual exercise, have become another of my regular practices, like yoga.
Patanjali says there payoffs for long-time practice in his Sutra I-14, although, as you can imagine, he’s not talking about warding off specific medical complaints. He contends that if we practice with faith and conviction continuously for a long time, that effort will loosen the grip of the 5 vrittis of the mind.

It becomes firmly grounded by being continued for a long time with reverence without interruption.*
*Four Chapters on Freedom, commentary by Satyananda Paramanhamsa