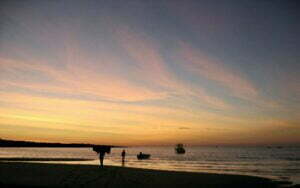 As I’m ageing, I’m more aware that some of my contemporaries are dying off. Even if death is not closing in on them, the early signs are there. More slowing down of cognitive ability, more visits to medical providers, more caution, more frailty and less mobility. And, hey, I am in this cohort, I remind myself often.

A lovely man died yesterday—his demise spurred on by having been on kidney dialysis for some time.

I didn’t know him well; initially it was by virtue of his reputation as an Aboriginal elder, law man and artist. Millions of people across the globe viewed his art when the image of a giant Wandjina (Aboriginal spirit entity) that he designed was featured in the opening ceremony of the 2000 Sydney Olympic Games.

Another expression of his respected status as an indigenous artist was his role in ‘refreshing’ Kimberley rock art, in particular the ancestral spiritual being Namarali.

Another highly developed skill was as a sailor and navigator. And that was how I met him.

He captained the Badmarra (in Worora language ‘sea eagle’) and guided our group of eight on a magical voyage through the Bonaparte and Buccaneer Archipelagoes.

Our vessel was an eighteen foot aluminium boat that included a canopy for storing our tents, kitchen and food stuffs. Two 150 HP Yamaha motors propelled us huge distances over a 10-day period. Lunchtime stops at isolated islands along our route would have our skipper don his fisherman’s hat and catch something tasty for our repast.

Near evening time, we would pull up at an empty beach and transfer the kitchen and tents via several tender trips to a campsite.

The Badmarra pierced little explored parts of the Kimberly Coast. Our skipper never had need to say a lot to us tourists. But he was so generous in showing us his Country on this never-to-be-repeated adventure.

On one excursion, he painted us with ochre paste before we were to visit a site of rock art perhaps 20,000 years old. He said, ‘Painting this way is from the Wandjinas; you have to paint yourself to be like them. You are refreshing your body and refreshing the Wandjinas.’

Arriving back where we started out at Derby Harbour, Skipper put on his artist’s hat and showed us his mother-of-pearl jewellery, representing ancestral figures that are considered great protectors of the Kimberley.

In memory of him, I’ve been wearing one of these today…a precious gift from him.

In this week of the Queen’s pompous and endless funeral proceedings, this beautiful soul will be buried, too. What will really happen is that he will be returned to the land that was never ceded to the Crown, and that will outlast all of us.