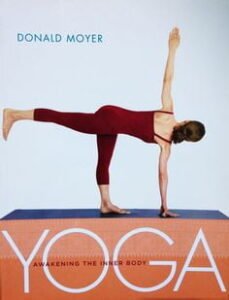 It’s probably a mistake to think you know a person simply because of what they’ve written. But Donald Moyer, the much-loved California yoga teacher, wrote an exceptional book. It is called ‘Awakening the Inner Body’, and it delivers on its title.

I worked with Donald’s book for the better part of 3 years. I live in a semi-rural area without the luxury of experienced teachers at my fingertips. The way the book was written, I felt like I had a highly trained teacher in the room with me.

Maybe some yogis wouldn’t have had the patience to stay with the intricate instructions of ‘Awakening the Inner Body’. Here’s a ‘for instance’ for Tadasana: ‘Adjust your pelvis so that your pelvic diaphragm is parallel to the floor, and the centre of your perineum is directly below the centre of your respiratory diaphragm.’

And another, in Paschimottanasana: ‘Turn your xiphoid process toward your navel, widen your midsternum, and turn the front edge of your thoracic diaphragm away from the base of your throat.’

I learned fine points of anatomy that were new to me even after having studied anatomy and physiology in two courses. I admit, I had to grapple with Donald’s vocabulary at times, and again and again. But it pointed me towards my own deeper bodily connections. Towards the embodied experience and, dare I say, a physical awakening. It generated pleasure and newness in my practice.

I wrote to Donald after engaging with his book for some time. I wanted to thank him and let him know that I was going to be in California and wished to join one of his classes.

He was very gracious in responding to my email and allowed me to drop in to a class that was fully booked. Donald was dearly beloved by his students, yogis who had been guided by him for years. I felt fortunate to attend what turned our to be in essence an Iyengar-type class. However, Donald’s approach was inquiry based: ‘How does it feel to do the pose this way? Where does your effort come from? Might you do the pose in a way better-suited to your body?’

In the class, no one was intimidated into doing the pose the ‘right way’. Rather we all felt free to explore and to let the poses unfold.

I had one other opportunity to do a class with Donald a couple of years later. At the end of the session, I hung back to ask a question. As he had seen me working through the class program, was there any one thing that stood out about the way I was doing poses? One bit of advice that I might take away.

Leave it to Donald to give me a lesson for life.