Why Was I Doing Those Advanced Poses? 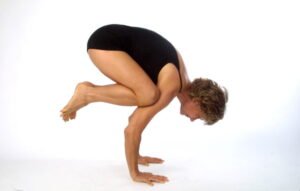 Why was Eve doing those poses?

This is a very good question. One we should be considering each time we come to our yoga mats.

I get asked occasionally whether the way I used to practise yoga might have led to my hip osteoarthritis.

I was diagnosed with this condition when I was 47 years old. It’s unusual for a person of that age to have developed such a serious condition.

Who knows why I did? You can tell your stories many different ways. I usually say it’s entirely possible that I simply pushed too hard in yoga. Or maybe that the way I was practising poses wasn’t ‘correct’. But then, to be honest, in those days I was doing mini triathlon training, playing tennis, cycling and pursuing a busy lifestyle, too.

Maybe genetics contributed to the erosion of my hip cartilage. Hard to say, as both my parents died early.

I do wonder, looking back, why I did push myself in all these activities. Why did I do poses like Ekapada Raja Kapotasana (pigeon pose) or Astavakrasana (8 angle pose) or Ekapada Sirsasana (leg behind the head pose)?

Was I testing myself! Showing off? Competing with other yoga teachers? Probably a mix of all three.

Older, wiser, and the owner of a relatively new set of hips (prostheses), I’m scratching my head over why I did yoga that way.

I told myself it was fun. But really, I was avoiding being in touch with myself, with what my body and soul really needed. That is, not to be flogged, pushed or even cajoled into ‘advanced’ poses. Poses that Peter Blackaby, author of Intelligent Yoga, calls ‘yoga exotica’.

I needed a more considered approach, one in which I was listening to my body. Doing as my friend, Donna Cavanough says, ‘starting slowly, then easing up.’