Perimenopause, Menopause, Yoga and Me 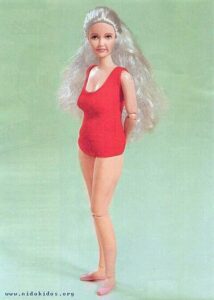 Even Barbie goes through menopause

In my late forties, I went through perimenopause. I had known it was coming, It was inevitable, of course. Yet I hoped, just as all women do, that I would have a relatively easy time of it.

Perimenopause can sneak up on you. When I was forty-seven years, I participated in a two week yoga retreat in Indonesia with international teacher, Dona Holleman. She had been trained to teach yoga by B.K.S. Iyengar and was as tough as he was. In the sweltering equatorial heat, we did lots of backbends and variations, headstands, shoulderstands, and long timings in the simple poses. Even the pranayama we did was hard and harsh.

My menstruation started two weeks early and I went for 3 weeks on and off. ‘On’ meant flooding–that is, heavy bleeding. The backbend workouts increased the flooding. Silly me, I didn’t want to miss out, so I didn’t beg off to take care of myself. To be fair to Dona, I didn’t tell her what I was going through. I think this is still the case, sadly. Women don’t really let it be known that they are struggling with perimenopause, whether to their teachers, employers or colleagues.

I made it through to menopause, the inevitable next stage. At this point, I made a conscious decision. No matter how I’d been conditioned as a women to resist menopause, I would open up to it. After all, it’s not a medical condition. It isn’t a personal insult. It’s a natural, organic stage of a women’s life.

I decided to create a big gesture to illustrate to my women friends and myself that we could celebrate this stage. I created a kind of ceremony–a menopause party. I felt like I needed to do something positive to make an impact against the tide of ‘menopause is a nightmare.’

Below is a copy of the party invitation I designed. It features some quotes I discovered. ‘Menopausal women are irrational figures, subject to hysterical moods that turn them into screaming harpies’. I added, ‘So then, come in fancy dress, if you desire, as harpy, crone, witch, grandma, or just your own wise woman self.’

And, ‘Help Eve chase away those ole’ climacteric blues.’ 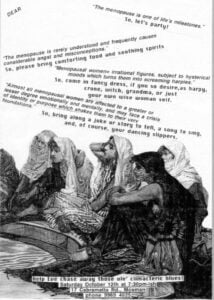 There was a television show around then called ‘Sex Life’, and they were about to do a segment on menopause. A producer got wind that I was having a menopause party. I wasn’t about to have them filming at the party, so instead, they interviewed me getting ready for it. They also filmed me doing my  regular yoga practice at my school, Sydney Yoga Centre.

This segment sent a good message to the audience: do yoga and you will fare well in menopause. This isn’t always the case, but was for me. Most of the symptoms of menopause were minimised for me or were non-existent.

A book that was popular at this time was Lesley Kenton’s Passage to Power. It’s an empowering text on transforming how we usually think about menopause. Kenton suggests that we can turn what is ordinarily considered a dilemma into an opportunity, That we can move naturally into the next stage of our lives–wise, contributing women.

My 50’s were creative and productive. I got married, sold a yoga business, wrote a book, started up another yoga school, and trained many yoga teachers.

If you are interested in making the most of your experience of perimenopause, menopause or even post-menopause, I have a happy announcement. Ana Davis, author, yoga teacher and trainer, and I will be leading a workshop called ‘Embracing Menopause’ at the Yoga Shed on March 17th. And, I’d love for you to join us. To register, email me at: eve.grzybowski@me.com

Ana and I will lead a discussion about the benefits of embracing rather than resisting the process of menopause and making our peace with this tumultuous life-change. We will explain what’s happening in our bodies as we move into the ‘wise woman’ phase, including an all-important understanding of ‘perimenopause’, and how to support ourselves with the tools of yoga.

Eve will guide you through a therapeutic Supported Inversions practice especially designed for menopause. The practice will finish with a deep relaxation to leave you feeling refreshed and inspired.