2019 and Getting Out of My Yoga Comfort Zone 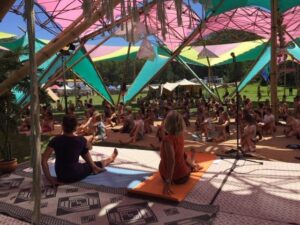 Eve and Ash on stage at Lost Paradise

Do you ever have the instinct to say or do something you know will take you out of your comfort zone? Something that makes you think ‘Uh-oh’ after you’ve committed to this crazy, potentially uncomfortable thing.

When I got a phone call from Catriona Byrne six months ago, it was relatively easy to say yes. The event was far in the future. I said, yes, I’ll be honoured to be one of the yoga presenters at Shambala Lost Paradise. I pronounced my yes despite the fact that I’ve avoided participating in most music/yoga festivals.  (Except for the wonderful Ekam Festival which is practically in my backyard.)

Why I have I skipped the festival circuit? Because I’ve felt it’s easier to teach to my age demographic, in my own style and to do so locally.

I knew the Lost Paradise festival would be attended mainly by young people between 24-30 years of age. I thought it likely that these young yogis would be used to practising a more dynamic style of yoga than mine. And, a December end-of-year festival was going to be uncomfortably hot and humid.

Also, it was just as well I didn’t know how large the festival was going to be. Put it down to living semi-rurally in our little backwash of Mitchells Island, population 350. When I saw what amounted to an ocean of tents, I started to get the scope of the event. In the end, there were probably in excess of 11,000 participants. That’s the half the population of our nearest town, Taree!

Despite my reservations, I ended up having a positive experience. I love teaching and this festival was a great opportunity to meet new people and have new experiences. I called my session Just the Right Mix of Yoga.  After 38 years of teaching, this is where I’ve landed. A yoga class needs to be the right mix of philosophy, postures, relaxation, breathing exercises and meditation. It’s tricky to get a good mix, though. It should never feel superficial or rushed.

One of the highlights of this festival was meeting up with colleagues: Michael de Manicor, Simon Borg-Olivier and Zoe Braithwaite. Each of these inspiring yogis are out there in the world. They are on the festival and conference circuit and making a huge difference based on years of life experience.

So, now I’ve experienced that getting out of one’s comfort zone is enlivening and expanding. If I have a New Years Resolution, it’s this:  In 2019, you’ll hear me saying yes more often.