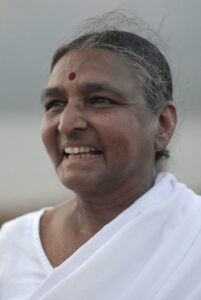 An obituary for Indian Yoga teacher, Gita Iyengar, appeared in my newsfeed this morning. She died suddenly in India on Sunday from a heart attack.

I was fortunate to have attended Gita’s workshops in Sydney on several occasions. Before those seminars, I experienced Gita’s tuition at the Ramamani Iyengar Yoga Intstitute in Pune in the eighties. I found her to teach with rigour and depth, a strong woman in her character.

I’ve thought of Gita as an almost-astrological twin as she was born just two days after me in 1944. Her death has saddened me greatly as I think of her as a yoga transformer, particularly for women.

Here she writes in her seminal book, Yoga: A Gem for Women:

An Indian woman’s life is a veritable tight-rope walk. Her status in society, the problems she has to face due to social and economic pressures, the burdens nature has imposed on her–all these result in stress and tell upon her health. The more I thought about my sisters–women and their particular problems–the more I was convinced that Yoga was the answer.

Gita has said that her mother was the impetus for writing this book for women, as she didn’t have faith in her own abilities. Her mother said, ‘God has given Yoga as a priceless gift for women, and this you must reveal to the world.’

I always felt that Gita lived the life of a nun. She dressed in white and was steeped in the wisdom of spiritual texts. Gita devoted herself utterly and completely to the needs of her father and brother after her mother’s death. She worked tirelessly to ‘reveal’ yoga to the world, travelling and teaching, even as her health was failing.

Many of the current women yoga teachers stand on Gita’s shoulders, and I am one. Pre and post natal yoga, menstruation and menopause practices, yoga therapy and restorative yoga flow on to us from her teaching.

In my view, 74 years is too early an age to die. But in terms of a legacy, Gita has left a tremendous one and a long-lasting one.