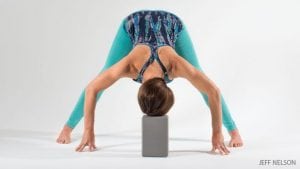 Does anyone need to be told that we are well into the cold and flu season?

For optimum health, all of us know to eat enough fresh fruits and vegetables, Vitamin D and lean protein. We also know we need to reduce stress in various ways, as in listening to music, playing with the dog and enjoying the company of friends.

Yet yoga is one of the most powerful medicines in the winter months. Postures, pranayama, relaxation and meditation are tools for boosting the immune system. These practices lower stress hormones and, at the same time, strengthen the respiratory organs, lymphatic system and overall circulation.

So, instead of cutting back yoga practice, let’s do practices that support our immune responses. Even when it’s hard to throw back the doona, get out of bed and get on the mat on chilly mornings.

Incorporate Setu Bandhanda Sarvangasana for 5 to 10 minutes at the beginning of your practice and perhaps again near the end. B.K.S. Iyengar described this pose as “a boon to mankind”.

Here’s how to do it:

Lie back over a bolster in a passive backbend. Rest your feet on an upright block at the wall. Check your shoulders are on the floor. You can bind your legs together just above your knees with a belt to keep your back relaxed. Then, once you’re settled, release the front of your neck and stay for at least 5 minutes. 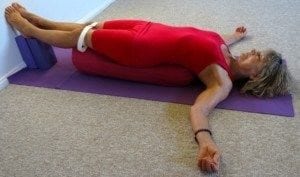 Regularly practising the art of yoga nidra is a great way of bolstering the immune system.

I’ve been a big fan of Richard C. Miller since the 90’s. He’s one of the main proponents of Yoga Nidra practice and has even put his own particular spin on it, calling it “the meditative heart of yoga.” Check out his website to see what a remarkable difference his teaching is making on the planet in all sorts of special populations, from post traumatic stress to drug dependency: http://www.irest.us/