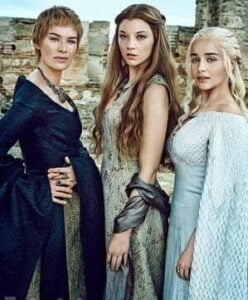 In the New World ‘We Are the Spark’

There’s something that’s been stirring in me. Maybe evoking a little of the feminist 70’s era that I was a part of. But it’s a much bigger movement than that. You, too, might have felt some of this excitement.

It started mid year as I watched the several queens of Game of Thrones take over that complicated fantasy world. Daeyerys, Sansa, Cersei, Melisandre, Arya and Brienne, all flexing their womanly powers and stepping into their ascendancy. The kings and lords of the seven kingdoms were conceding their might left right and centre. Or even dying at the queens’ hands.

Then, I viewed The Handmaid’s Tale television series, based on Margaret Atwood’s dystopian novel. Was there ever a more cruel expression of patriarchal abuse? Yet, in the last scene of episode 10, the handmaids expressed hope with a rebellious march against their tyrannical masters. What music roused them to this brave act? Have a listen to some of the song here.

Finally, there were all the fabulous women of the television series, Big Little Lies, and even the new Star Wars movie, The Last Jedi. Who will take Luke Skywalker’s place? Of course, a woman.

The American mythologist, Joseph Campbell, worked with director George Lucas to create the theme that ran through the Star War movies for decades: the Hero’s Journey. Campbell posited that ‘myth is often something experienced unconsciously by a collective’. He believed that the myths of the collective unconscious shape us. If he were still alive, he might see the ‘Heroine’s Journey’ taking shape.

I feel it. There’s a new day comin’ for women around the world and it can’t come too fast.

If you haven’t been paying attention recently to news and social media, you’ve missed the millions of women getting out there, telling tragic stories of being sexually assaulted.

They have used the hashtag #MeToo on Facebook and Twitter to declare instances of sexual harassment and abuse. These allegations point to men in all areas of life: the entertainment industry, sciences, academia, and politics. Women are being taken seriously and supported in their allegations by men. As a result of this flood of stories, some men have been fired from executive positions and others have resigned from legislative office.

Spiritual leaders are being are being taken to task for sexual abuse, too, notably the Tibetan Buddhist teacher, Sogyal Rimpoche.

Stories of abuse abound in the yoga world and now they are being publicised. Ten prominent teachers have shared their own stories of sexual assault in the Yoga Journal.

I have more than one story to tell myself. In this moment, the one that comes to mind happened about 40 years ago. I was a new arrival in Sydney from the United States. A yoga practitioner, but not yet a teacher.

I was full of enthusiasm for doing dynamic and advanced yoga, and didn’t yet know anything about approaching poses safely. I developed sciatica, and went along for treatment to a chiropractor recommended by yoga friends.

This man treated my sciatica. When he finished the treatment, he then forced himself on me and had intercourse. I was disgusted and, at the same time, in shock. I couldn’t get out of his rooms fast enough.

What did I do about it? I was ashamed and did nothing, spoke to no one. Doing nothing compounded my shame.  I stuffed the experience down. The only person I’ve ever told about this incident is my husband. He encouraged me to write about it here, but I still feel loathe to name names. I do appreciate the courage that it’s taken for other women to name their perpetrators.

Women around the world are aligning at this time to stop this sort of violence. It is and should be intolerable and men know that, or will come to know it.

I ran across this old song, sung by Mama Cass in the seventies. The hope of many generations of women is beautifully expressed here.