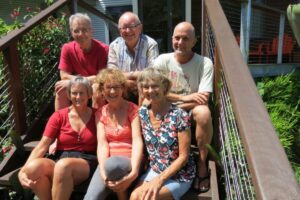 When it comes to community, humans need quantity. We need copious amounts of engagement. When we engage with others, our neurotransmitters light up and a happy ‘cocktail’ of hormones floods our systems. Healthy social interaction boosts our energy, moods, immune system and ability to heal. –Kristen Schneider in The Elephant Journal

Yoga is a holistic discipline. It covers physical, mental, emotional, spiritual dimensions. One of the most important parts of yoga, though it’s often taken for granted, is community.

This ‘coming together in unity’ fosters well-being, as much as doing asanas, pranayama, and meditation.

I believe in the importance of community so much that I’ve chosen to live communally. We are three couples, living under the same roof, sharing our lives together. This experiment in a different way to do retirement has been highly successful. We’ve been the subject of media attention even from the inception of our vision thirteen years ago.

ABC television’s Seven-Thirty Report interviewed us and this is the segment that was broadcast recently. You’ll see at the beginning of the video that the idea of living communally has caught on. A Balmain consortium is just on the cusp of hatching their own version of living and ageing together.

You may have heard our group of six called The Shedders. My housemate, Michael, named us. He’s good with words. When we moved to the country, there was only a big old green shed on our four acre property. Also, can you imagine how many of our belongings we had to shed to combine everything into one house?

One of our shared interests is yoga. Michael and Judy, I met through Iyengar yoga in the late 70’s;  Five of us are into yoga, and Rick is still, at the time of this writing, a hold-out. I still am hoping, though.

If you would like to know our whole story you can find out all about us in The Shedders book (digitally on Amazon).