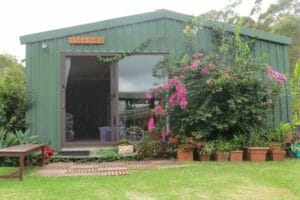 For the seventh time this year, and over past years, too, I’ve been featured in the media.

Is this because I’m a celebrity yoga teacher? Not at all… Even though one of these media exposures was a full page interview in Focus Magazine to promote the upcoming Ekam Yoga Festival.

Most of my renown has happened because my housemates and I have become the darlings of how-to-do-retirement-better media coverage.

It all started three years ago when I bailed up an ABC radio producer at an event. I suggested to her that we ‘Shedders’ were an interesting mob and that she might want to interview us. The interview, as it happened, was aired on By Design and can still be seen and heard on the ABC website. The most recent interview on which the Shedders featured was just last Saturday night on Channel 7 news.

Okay. Now I have to explain what Shedders is (for those of you who don’t yet hold it as a household word).

In 2004, my husband Daniel and I joined with two other couples–old friends–to purchase a 4-acre country property. We enjoyed the use of the big tin shed on the property for holiday breaks. It’s where we began to create our vision of moving from the city to eventually retire in our dream home.

One of us, Michael, said we needed to call ourselves something that reflected our growing affection for our property and our vision for the future. So we became the Shedders. This moniker also seemed to be an apt word for describing the shedding of many household possessions and maybe even our city slicker skins.

Why are the Shedders of interest?

We Shedders have done something that some people think about, even aspire to, but for most part, the notion lives as just a nice idea. We’ve moved in together, live peacefully under the same roof, and enjoy each other’s company hugely. Because of the large number of us, we have extended our reach into diverse communities: a garden club, a writers’ group, a community choir, men’s group, a book club, and primary school and palliative volunteering.

We are doing retirement quite differently than the ‘norm’, as three couples living together. One of the things that is known to promote health is strong social connections. We Shedders have these connections in our day-to-day living but also through the communities we’ve cultivated.

Life is richer for us as sixty and seventy year olds because we cheer each other on and inspire each other. Who knows what our future holds as we age and face the difficulties of becoming old? But somehow, I think the strength of our support and inspiration will be more than enough to see us though.

If your interest is piqued, you may want to read Shedders: The Book.