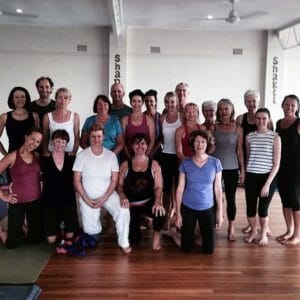 ‘Be great, none of this humble stuff!’, said friend Heather to me as I trundled off to teach an out-of-town yoga workshop. I can see why she would advise me thus.

I probably come across as not overly ambitious when I teach. I don’t mean to be blasé. I do a lot of planning for any seminars I teach. If anything, I over-plan. When I do that, I end up more worried about my plan than being present to workshop participants. Not good yoga teaching, in my book.

It’s such a delicate balance to be relaxed and effective.

I started limiting my yoga ambitions in the 90’s when I remarried and became step-mum to a nine year-old. Instead of travelling NSW and interstate, as I had been doing, I tried to be at home more. I also cut back on my early morning and some evening classes.

Meanwhile my contemporaries were creating their own yoga brands and becoming international teachers.

The great thing about being at home is that it’s easy to practice yoga regularly. So, I did and so I still do.

But I couldn’t stifle my passion for yoga. I wanted to express myself in all the ways possible. I founded schools, designed and taught teacher trainings, wrote books, and blogged.

I liked being out there, spreading the yoga message. Yet, I didn’t think much about fame, fortune or being influential.

Today I got to thinking about the sort of influence that yoga teachers have in the world because of a FB post that came my way.

A New Zealand colleague, Kara-Leah Grant of the Yoga Lunchbox, is researching some interesting questions:

2. What living yogis do you think have influenced modern yoga the most?

There have been a myriad of bad influencers in yoga teaching in recent times. Some of the shenanigans that teachers have been able to get away with have been because of being hypocritical.

These days, social media, blogging, books, podcasts and such let a teacher’s message and stance be easily disseminated into the wide world.

Yet when I think of positive influence, that can only come from the match between what a person says and what they do. No one is perfect. No one is deserving of being put up on a pedestal. So many of the former greats are now positioned firmly under the pedestal.

I’ve been influenced by teachers who are vulnerable, who are comfortable with their humanity and who have integrity. Pema Chodran comes to mind.

Without ‘pedestalising*’ her, Pema seems to be unconcerned about influence and being great.

She says and I agree:

I can scarcely believe that I’ve been teaching yoga for 35 years and ‘being here each moment’ seems as slippery a skill as ever it was.