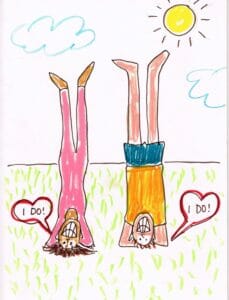 The above drawing was done by Soo Balbi on the occasion of our wedding in 1994. I like the message that the card proclaims: this is a non-conformist marriage. It also says that yoga is an important part of Daniel and Eve’s lives, and it can also be done anywhere.
A few years ago I created the YogaAnywhere practice cards. My mission was to encourage people to do yoga wherever and whenever they wanted. ‘The more personal practice the better’, I thought. Regular yoga practice has worked well for me; let’s see if I can turn more people on to it.
Yoga practice isn’t meant to be restricted to the sanctuary of a studio or a school. Think of where yoga began. The original yogis did their practices in the forests of India.
I’ve done yoga in unusual places and you may have too: planes, offices, airport terminals, beaches, and cliff tops.
This weekend Daniel and I went away for our 21 st wedding anniversary, camping at Trial Bay, NSW. While there, I was able to fit in a few practices. The yoga helped me recover from sleeping on a mattress on the hard ground. One of the poses that gave me relief was headstand. There’s something about inverting one’s body and defying the effects of gravity. Your tail goes up as you press your strong arms down, and everything in between becomes long and lithe.
Going upside down by itself won’t cure a sore back, but you can use the time you are in headstand to mobilise your core muscles. As well, you use the strength of your buttocks muscles and legs to take much of the weight off your lower back. 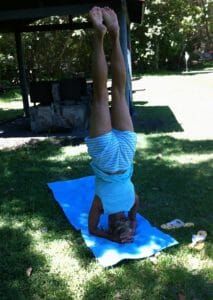 If you are concerned about going up into headstand, for whatever reason, a good place to develop the necessary strength and muscular prowess is on the ground.
You can build up the muscles of your arms and back by holding this pose. Or, you can do the ‘dolphin’ version of the pose by moving your shoulders forward over your elbows and then back into the dog pose shape five or six times. Then, take a rest and repeat so you’ve done 3 sets altogether. 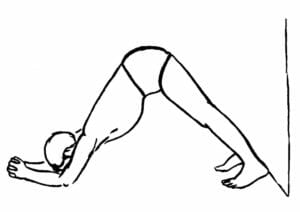 I’d be curious to hear about some of the unusual places that you have done your yoga practice….