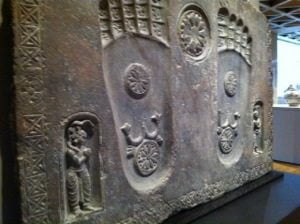 In a world where yoga is practiced everywhere and at all times, global travelers who want to sample different schools and styles are fortunate to have countless classes at the tips of their fingers.
This last week I experienced an unimaginable contrast in the two yoga classes I attended, one in Boston, the other in New York City.
Jamaica Plain (Boston) is a lively neighborhood where ethnic assimilation is still going on. Eateries include African, Asian and European cuisines. The premises for these establishments sit cheek to cheek with thrift stores, a health food cafe, a farmers market and taverns. Smack in the middle of things is the Centre Street Yoga school.
I was surprised that the school’s regular Saturday 9:30 am class was going to be held as it was the Fourth of July, an important holiday in the U.S. As it turned out, I squeezed into the class just a minute before it kicked off. Apparently because of the public holiday weekend, there were many tourists like me in the class. Twice the number of attendees as usual.
I haven’t been in a class of 50 people for a very long time. I haven’t done yoga in a hot room for yonks. And, I haven’t felt so pressured to perform in years. Does it matter that I myself was creating the pressure, not the teacher? Not really. The teacher was a confident, experienced instructor and managed to keep all the plates spinning smoothly, even though he’d never laid eyes on a fair number of us before.
How did It go for me? I stretched myself mentally, emotionally and physically. A few times, I wanted to take a potty break just to get out of my self-inflicted pressure cooker. I worried at times that I was going to walk out worse for the wear. I kept watching my watch. Suddenly it was savasana time. At the end of it all I felt great. Go figure!
The other school I visited is called Atelier Yoga, a space that lives up to its name. It’s on the top floor of a Union Square (N.Y.) edifice and it’s tiny. Six people in a pinch might fit into the space, slender bodies at that. The room’s ceiling height is taller than the width of the square room. On the day Daniel and I attended the 4 pm session, it was just us. A semi-private class in small premises might have been a cloying experience, but instead I felt nurtured by the sweetness and humility of the teacher. She had a good sense of humor, too, and told us that her extreme attention to detail in folding the yoga blankets was a function of Iyengar O.C.D. 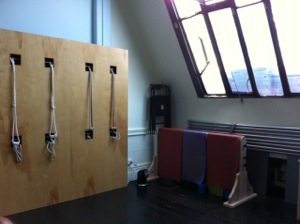 The beauty of yoga is its diversity. It makes me that there is friction and factionalising in the yoga world. I’ve been involved in this world for over 40 years, and it was ever thus. For my part, I say, vive la difference. Go forth and sample and enjoy!