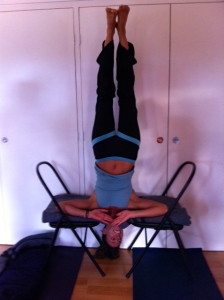 Sirsasana is known to be a beneficial posture for dozens of reasons. One of them is that it’s a mood enhancer for many people: it can make you feel happy and uplifted. But not everyone can do it with ease.
A few years ago a student who attended one-to-one sessions learned to do the above version of headstand. Until he found a supported way of doing the pose, he couldn’t do it at all because of his excessive weight. Supported sirsasana became his new best friend and a yoga class was incomplete if he didn’t get to do it for some reason.
The props are two chairs spaced just far enough apart to allow the practitioner to place his head between them. You need plenty of padding (blankets) under your shoulders. Place the chairs on mats so they don’t slip.