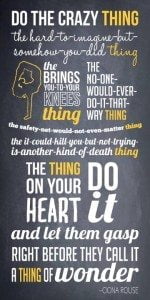 My husband and I celebrated our 20th wedding anniversary last week. For many people this milestone could be considered an improbable achievement, given that the median duration of marriage was 12.2 years in 2012.
Twenty years of marriage is almost time enough to experience three seven year itches. It’s time enough to fall into dull routines and think that you’ve said everything there is to say to each other. It’s enough time to get awfully comfortable with the other because you know in advance what they are going to do or say, so you end up just tuning them out.
Daniel and I definitely do not have a boring relationship. We keep each other on our toes, in a good way. For instance, Daniel came up with the notion that we might want to have sex every day for a period of time – not something that sixty year olds usually get up to. With a little trepidation, I agreed to the idea and the experience turned out to be better than I ever imagined. Daniel wrote on his blog Chaos Central about our experience if you’d like to read what it was like.
To mark our anniversary, we took a short holiday to New Zealand and stayed at the magnificent Chateau Tongariro which happens to be situated in an area of volcanic activity – Tongariro National Park. If you feel the need to shake yourself out of any sort of complacency, marital or otherwise, try hiking the the Tongariro Alpine Crossing. Not without some volcanic risk, the area’s most recent eruption (considered small) was in 2012; there were around 100 walkers on the track, and fortunately no one was hurt. If you decide to accept this crazy tramping mission, you will be climbing 1000 meters, part of it ruggedly steep and walk for between 7 and 9 hours, likely in windy, cold weather.

And, Daniel and I did it! Back at our lodging after the walk, I tried doing legs-up-the-wall and reclining hero pose, but as it turned out rest and the hotel sauna were the best restoratives for my two artificial hips and leg muscles. Oh, and a well-deserved glass of New Zealand Sauvignon Blanc.
I discovered a good kind of craziness – the sort that has you take a leap – whether into marriage or into a seemingly impossible alpine crossing. It makes you feel fully awake and alive just because you are being brave, vulnerable and irrational.