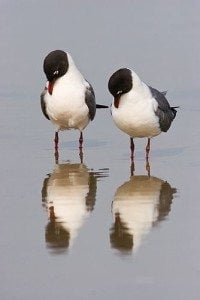 If you’ve been patting yourself on the back because you are advancing so admirably in your personal development, it probably won’t be very long before you get tested. It may happen that you develop a disagreement with a friend, or, you feel hassled by your employer, or your kids throw a hissy fit. It’s often those people closest to you, and usually the ones you love the most, who will really get to you. Incidentally, irritations never seem to happen in the honeymoon period, as with newborn children or newlyweds, but they do seem to develop over time with most people.
My husband and I have been married nearly 20 years, plenty of time for marital niceties to have faded somewhat. A while back he informed me – as Dame Edna would say, ‘in the most caring way’ – that he’d been noticing that ‘my fuse was getting shorter’.
It’s not fair taking the statement out of context, but nevertheless, it gave me pause for thought. I think what he meant was that at times I was showing up with grumpy-old-person behaviour. In fact, I’m pretty sure that’s what he meant. It was helpful for me to take time out for self-reflection, which eventually reduced my irritability, as did opening up and talking to him about it.
Recently, I became upset when someone I don’t know very well sent me several abusive, irrational emails. It took me some time to find my equilibrium (and to put a filter on my email), but I think I handled the situation well. I took time out before I wrote him a short email, in which I set out solid boundaries, and then I stopped any further contact. I know that if I’d reacted to him with anger or tried to argue with him, I would have just fuelled his anger.
There’s a yoga precept that is specifically meant to help counteract irascibility or reactivity by fostering self-awareness. In Sanskrit it’s called svadhyaha – or self study.
The notion of self study is outlined in Patanjali’s Yoga Sutra. One of my favourite commentators on the Sutra, Vyn Bailey, says that svadyaya is not really study of oneself in a self-absorbed way. Rather, he says, it’s the study that you yourself get involved in. You do your homework, so to speak, by looking into the way you are relating to people and things in your life. If you are annoyed or ill-tempered, bring those feelings home, and see what happens out of sitting with them, instead of projecting them outwards.
Those people who seem to be able to get to you may merely be holding up a mirror or testing how strongly you can stand in your unreactive self. Often these people who show up as irritants for us are our best teachers.
There’s a further benefit of us ‘doing our homework’. Ultimately this kind of careful reflection will throw light on the entire structure of one’s personality and can lead to one of the goals of yoga – the understanding of the self and one’s consciousness.