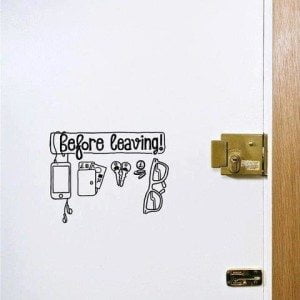 Do you consider yourself forgetful? Have you misplaced valuable items and been too embarrassed to mention your lapses to others? Are you fearful that you are becoming increasingly forgetful with age? What about those words that are just on the tip of your tongue that turn out to be as effervescent as champagne bubbles? And, the people who you meet on the street whose names you should know as well as your own… but for whom you only draw an embarrassing blank?
Welcome to my world. In fact, I live in a household of 6 sixty to seventy year olds, so in our home, it sometimes feels like the very act of ‘dis-remembering’ gets amplified times six.
Of course being forgetful is perfectly human and not even necessarily related to growing old. If you’ve raised teenagers, you know they can be the worst, frequently forgetting keys, phones, and various bits of school uniforms. Pregnant women, too, are reported to have high levels of absent-mindedness that carry over far into the postpartum period.
I’ve been thinking about the topic of senior moments over the last ten days as I’ve lost, forgotten or misplaced a number of important possessions.
For instance, before I lost my iPhone 5c permanently* on last Thursday, I misplaced it. I was distracted while unloading the dishwasher, didn’t finish the job, and somehow placed my iPhone, which I’d been holding in my hand, in with the clean dishes and closed the door.
I think I can hear you say, ‘no, tell me how that is possible’…. Well, I’m here to tell you, anything is possible! The good news is that I had my phone switched on so it was possible to hear it ringing. The bad news is that a dishwasher, as it turns out, is almost sound proof, and it took a long time to discover the phone’s hiding place.
Rather than belabour the sad saga of recent losses and misplacements, let me tell what I learned from these experiences. I learned that it’s completely unhelpful to keep a mental file of all the things that I mislay or lose. You know how we people of a certain age say, ‘Oh, I must be losing my mind’ or ‘I’m getting so forgetful’ – expressions that indicate that we are collecting evidence and keeping track of memory loss.
I noticed I started doing that myself almost as if I had a mental manilla folder and was putting in it notes on each incident of lack of attention.
I’ve decided it’s preferable to treat these recent events as isolated instances of not being mindful, reminders to turn up the volume dial on paying attention – especially and obviously, in my case, when I’m handling my mobile phone and reading glasses.
Do I have any company?
*I’m hoping that my phone will turn up, although I believe I lost it at the beach – in which case it could be in a watery grave.