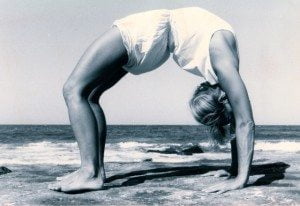 I watched a video today featuring Richard Freeman talking about yoga while his students were doing Ashtanga Vinyasa – Mysore style – in the background. Some of the poses they were performing were ones I used to do. Others I’ve never been able to do, and, at this stage in my life, am unlikely to achieve.
(If you can’t see the video below, try refreshing your screen….)
[vimeo id=72456606]
Do I feel sad about not being able to do these sorts of advanced poses? Not at all. Three and a half years ago I underwent double hip surgery, a procedure which gave me brand new hips. It was a big ordeal, but every day post-surgery I recovered a little bit more of my strength and flexibility. After 18 years of being arthritic, I was completely pain-free.
It’s all relative. When I was able to do the 1990 version of urdhva dhanurasana pictured above, was I grateful? Not that I remember; I think I just took it for granted, or maybe I was a bit of a show off.
In the image from 2011, I was over the moon to be able to do bridge pose at all – the first time that I’d been able to enjoy that pose in years. It felt like taking a new sports car out for a ride.
Here’s a pic of a yoga student trying to figure out how to open her shoulders in the backbend. How is that done? It’s unknown territory, and that’s the beauty of yoga. Sometimes you have to take a pose apart to understand it. It’s an exercise in using somatic intelligence, letting your body inform you where to go next, or when to be still, or when to back off. And all of that has you be right in the moment.