We’ve just celebrated Mother’s Day this last Sunday, and I believe it was for me one of the most satisfying I’ve experienced.
First of all, I was on Kangaroo Island, spending 4 days in the company of 6 other women who are known for their wisdom, spunkiness and joie de vie. Our ages range from 40’s to late 70’s, so there are grandmothers and grandmothers-to-be in the mix.
Secondly, we women like to set up meaningful rituals, and on this Mother’s Day occasion, sitting around after dinner, we each shared about our mothers. I learned a lot about my friends from how they described their mothers’ lives. For instance, the freedoms we now enjoy were not something to be taken for granted in the last generation. Our mothers did battle for them.
Another thing I saw as I talked about my own mother was how much more compassion and appreciation I have for her from my vantage point of 67 years than I ever did when she was alive. (She died relatively young – just 53.)
Last of all, our Mother’s Day ritual was all the more poignant because, for the first time, we had a young man along on our annual women’s retreat. He’s a handsome 19-year old, who has been experiencing difficulties in his life, for which his mother felt a strong intervention was necessary.
Richard was invited to our table to speak about his mother (seated next to him), which he did with great love and admiration. I could imagine he was speaking on behalf of all sons and daughters anywhere who might speak lovingly of  their mothers.
We asked Richard to sit with us a little longer when he finished to let each of us address the best in him and say the possibilities we saw in him. He listened carefully to our short speeches and did so with dignity and grace. Can you imagine yourself as a teenager hearing and letting in the well-cured love of a host of women you’d known for years and respected. Only a special young person would have the capacity for this sort of  experience.
I think Richard will now go back into his life having been positively contributed to by us. Hopefully he knows  what a gift his presence and receptivity  has been to us. After all, it’s what mothers live for. 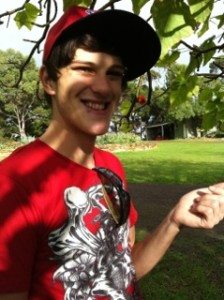