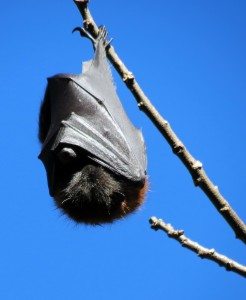 If you ever drop in for a visit to us on Mitchells Island, I might take you sightseeing to Wingham Brush.
Never heard of it? It’s a small miracle of remnant rainforest in the sleepy riverside town of Wingham. The iconic Aussie poet, Les Murray, has written a poem to the native, furry inhabitants of Wingham Brush called “The Flying Fox Dreaming”. Murray’s description of them is reminiscent of Australian yogis: “Upside down all their days, antipodean….”
These grey-headed flying foxes live up in the forest canopy, and if your visit is  in peak season when all the babies have been born, you’ll hear a cacophony to up to 200,000 screeching creatures. Who’re Ya’ Lookin’ At

I’m impressed with the way the flying foxes can hang upside down for long periods, wrapped up in their leathery capes. Has their physiology specifically adapted to lengthy periods of inverted venous blood return? Does it help them chill out and become internally focussed, as in a state of pratyahara – the yogic practice of withdrawing the senses?
Chip Hartranft* says of the state of pratyahara, “As the senses spontaneously cease to react to external stimuli, … consciousness begins to grow calmer and more refined in its perceptions….” This harkens back to Sutra I-2 which relates to the systematic practice of stilling the mind (nirodha).

Then interiorisation develops and obstacles fall away.*
*The Yoga-Sutra of Patanjali, translation with commentary by Chip Hartranft
More about “the obstacles” later!