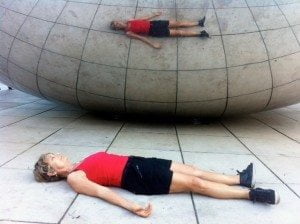 Savasana at The Bean in Chicago

In the land where I was born, the U.S.A., the word fancy is not often used to mean imagination – as in “flights of fancy”.  We would be more likely to say imagination or whim. Such a lovely word, though, derived of course from fantasy.
No matter what it’s called, is there a place for this faculty of mind in a world where it’s easier to get on by having our two feet firmly planted on the ground.
As yoga teachers and practitioners, we have an imagined picture of where we want our students and ourselves to be going in the practice of yoga. Isn’t this a sort of visioning, not representing a fait accomplis. We’re dealing with real people in practical terms but what’s in our mind’s eye (great expression) gives us direction.
When the six of us Shedders who live on Mitchells Island thought up the idea of having a property and house all together at some time in the future, we just pulled that idea out of the ether. Then, we did a whole bunch of actions over several years, and here we are.
When I was recovering from double hip surgery a few years ago, I visualised myself whole and complete and participating in life as before. Did that notion nurture my healing?
Yogis adopt a sankalpa in the practice of yoga nidra – a short phrase or sentence to help unite conscious awareness with the unconscious forces lying dormant within us. It’s meant to train the mind and awaken will power to elicit positive changes in one’s life.
There’s a Sutra relating to the way we use our minds to imagine:

Fancy follows on word knowledge without any object corresponding.*
I think there is quite a useful place for imagining even though the acharya B.K.S. Iyengar seems rather down on it. He says in his Light on the Yoga Sutras of Patanjali, “…vikalpa [fancy], a vague and uncertain knowledge which does not correspond to reality. In such a state of delusion, one is like the hare in the fable who imagined it had horns.”
The thing is, people have imagined even more incredible things that have come true. The next thing we know they’ll be mining the astroids for water and oxygen.
*Patanjali’s Meditation Yoga, translation and commentary by Vyn Bailey