Near the end of last year, I was out in the Yoga Shed, all by my lonesome, practising yoga, and my mind drifted. (I think I was doing supta baddha konasana or some such very relaxing pose.) I was thinking about what other people might be doing in their yoga practices these days – old cronies of mine, like Peter Thomson, Pixie Lillas, Shandor Remete. Did they still do a mainly asana-based practice? Or, had they adopted more of a pranayama/meditation orientation? I thought, wouldn’t it be interesting to be able to look through a keyhole and see what people were doing in the private of their yoga practice that might be interesting, inspiring, surprising…. That day, I called up Colin Clements from Australian Yoga Life magazine and suggested a column called “Through the Keyhole”, which would feature interviews with practitioners describing their yoga practices. The contributors could be yoga teachers, beginners just learning to do home practice, or experienced students willing to share struggles they might have with their practice. And, they might come from any tradition or style of yoga. With this March-May issue of the magazine, my suggestion has been launched. And, Colin has kindly let my own interview introduce what I hope will be a popular series. Here’s a little excerpt…when I was asked, “Why do you practice?”

It’s partly a habit. It’s my path to being the person who I am intrinsically…. [Yoga] helps me be true to myself in the real world (off the mat), and that becomes a habit by itself, the habit of being me.

Please have a look at Issue 34, not just for my piece, but also for all the great encouragement that that the articles of Australian Yoga Life provide. 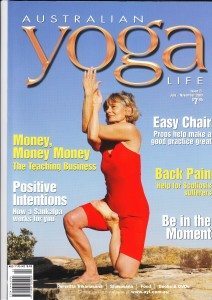