I feel hugely fortunate to have had nearly 20 years of partnership from my husband Daniel in my journey along the yoga path. Perhaps some of the yogis out there have that sort of sentiment regarding their spouses.
Daniel doesn’t in any shape or form consider himself a yogi, although he has been practising the discipline with me for these last two decades. He considers himself a consumer of yoga, not a practitioner, the distinction being that he only attends classes and doesn’t do self-practice.
Daniel has been my not-so-silent partner in two yoga studios I’ve owned in the past and is now part of my YogaAnywhere practice cards team. I would never have enjoyed the degree of success I’ve had in business without his unswerving support and help.
So, on the night of our 18th wedding anniversary, I say Big Thanks, and Love to him.
Here’s how we celebrated today, by sightseeing over Sydney Harbour and northern coast today…. 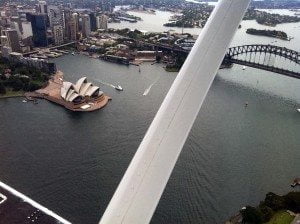 Two Icons from the Air