Symmetry in action, Urdhva Dhanurasana is a challenging pose for most yogis. If we could only get the backbend arc to be even from the top of the spine to the tip, then the experience would be pleasurable and gratifying. Anything less, we feel heavy, pinched and sometimes defeated. Like many adults, by the time I came to do yoga, it had been many years since I’d done backbends. The first ones I attempted in a yoga class made me feel exhilarated. My teacher was a hard task master. We students did 25 Urdhva Dhanurasanas, followed by 10 “easies”. Those are when you push up into a backbend, come down half way, then push up again, times 10. Picture doing 10 quick push-ups as though you were upside-down and inside-out. It was exciting but ultimately exhausting. Here’s a beautiful photo that Carole Baillargeon took of me about 20 years ago: 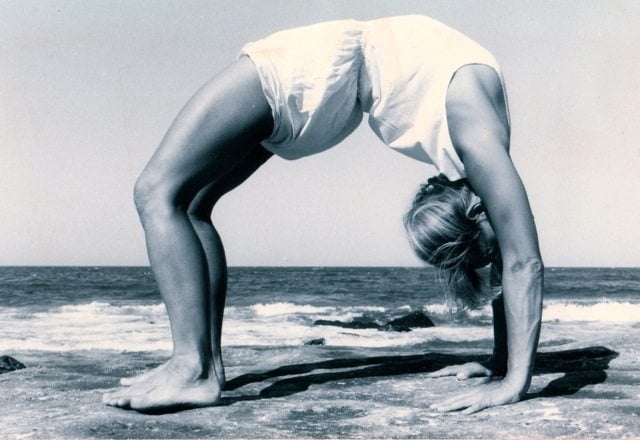 It took me decades to realise that I didn’t have to do a practice that included 25 Urdhva Dhanuasanas, 10 easies, 25 drop-backs from Tadasana, and 25 from headstand. You would think I’d have learned more quickly as I’d often have sciatica flare-ups, no doubt exacerbated by forceful practice. Call me lazy, if you will, but these days three thoughtful Urdhva Dhanurasanas, holding for a while to achieve that optimum even arcing of the spine – with certain muscles turned on and others turned off – that’s enough. I feel good afterwards and energised. Here’s me venturing into backbend territory again exactly one year after my double hip replacement surgery. 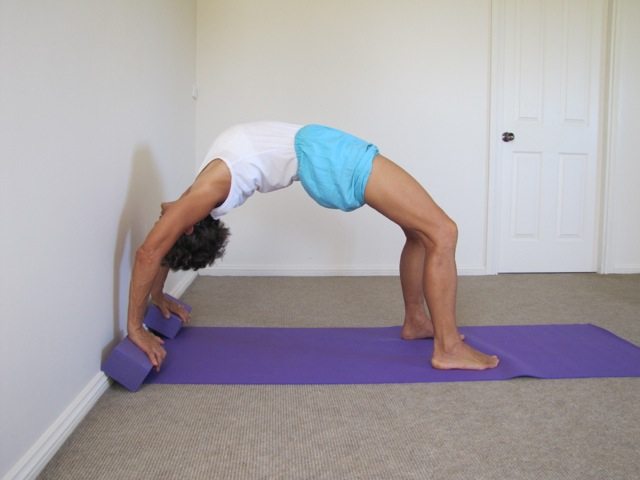 If you’re a beginner, start small – maybe the little bridge Setubandha, sometimes called dwi pada pitham. Be sure to build up your arm and core strength so that when you’re ready to do upside-down bow pose your arrow will hit the mark.