It’s hard to imagine Chicago, “that toddling town”, the Windy City, inspiration for the glitzy dance-musical, as being a place where Vedanta was showcased in the United States.
The stage was the Parliament of World Religions in 1893, and the inspiring presenter was Vivekananda.
“The eloquence of Swami Vivekananda and his introduction of eternal values of India…has been identified by many to mark the beginning of western interest on Indian values – not as merely an exotic eastern oddity, but as a vital religious and philosophical tradition that might actually have something important to teach the West. The opening line, “Sisters and Brothers of America…”, was greeted by a three minute standing ovation from the audience of 7,000.
“Sectarianism, bigotry, and its horrible descendant, fanaticism, have long possessed this beautiful Earth. They have filled the earth with violence, drenched it often with human blood, destroyed civilization, and sent whole nations to despair. Had it not been for these horrible demons, human society would be far more advanced than it is now.” (Wiki reference)
The words of his evocative speech have been made into art to share with visitors to the iconic Art Institute of Chicago by contemporary Indian artist Jitish Kallat. Each riser of the Grand Staircase presents a line of Vekatananda’s speech, using colored LED’s that mirror the terrorism alert colours the U.S. Homeland Security uses. Please make time to read the Art Institute’s entry describing this installation, including the full text of Vivekananda’s speech – even more relevant now as at the end of the 19th century.
http://www.artic.edu/aic/exhibitions/exhibition/kallat 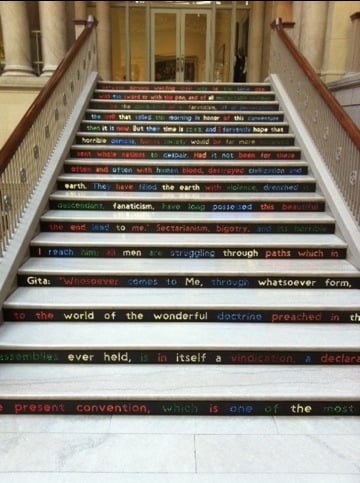