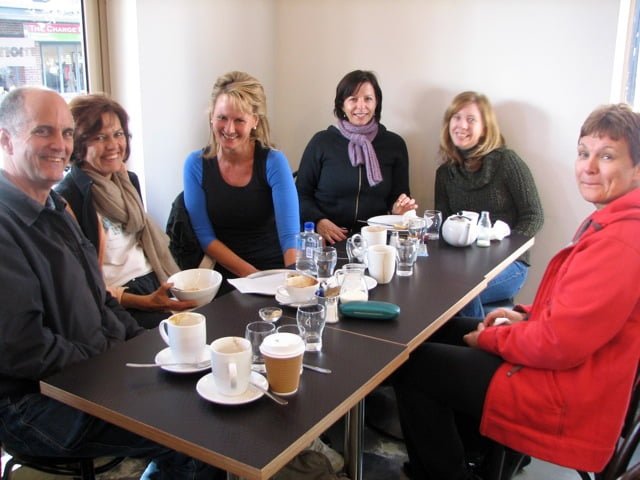 Yoga and coffee go together like your two interlocked hands. A good yoga class builds thirst and appetite for a good cafe latte, or some version of that delicious brew. Why is that? And, does it matter? The stimulant loosens people’s tongues and makes them want to stay around chatting for hours. It’s the stuff of community-building.
I started drinking coffee when I was 16 because I thought it would help wake me up for my early morning summer school classes. I’m embarrassed to say it was instant coffee, but what did I know of the world of coffee. And besides, I’m American 😉 The other sort of java drunk in my house was coffee percolated in an aluminium coffee maker, where the coffee perked all the long day. Mmmmm.
It was a total delight to arrive in Sydney in 1976 and discover the Italians had gotten here first – a race of epicures who must have brown liquid in their veins.
When I opened the doors of Sydney Yoga Centre in 1985, we shared the suburb of The Haymarket with the Roma Cafe. Is it still extant? I hope so, though I haven’t been there since the eighties. In those days, after teaching a two-hour 6 am. yoga class, some of the discerning students and I would head for the Roma. I talked myself into believing that a rich, long black coffee and an huge almond roll was a balanced breakfast. If not entirely healthy, it was scrumptious.
Older, wiser, I now restrict myself to 2 weakish coffees a day, and sometimes forget (but not often) the second one. Even in sleepy little Mitchells Island, we’ve discovered we can get a decent cuppa. Little Favourites Cafe in Old Bar would give Robert at Montagu’s a run for his money, but don’t tell him I said so.
When you live on an island, you don’t ever want to burn any bridges.