End of 2019: Committing to Loving Kindness 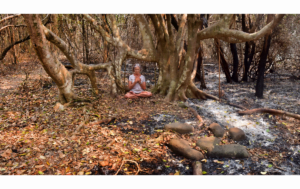 Climate crisis: Hang on to your seats

I have been on a climate crisis roller coaster this year. Maybe you have, too?

Early in 2019, I concluded that what’s been happening in our environment was more than a change. It’s an emergency. I started to use vocabulary and found examples that described what was happening as a dire situation.

I began to educate myself. I researched the global climate crisis through websites, newspapers and videos. As my interest heated up, Australia’s climate was getting hotter and the drought more firmly entrenched.

This 2019 winter, the season when it’s not supposed to happen, bushfires flared up. To date, the fires have hungrily kept expanding. More than 5 million hectares have burned throughout Australia.

In my research, occasionally I scared myself. I read a fear-engendering article by Jem Bendall about ‘Deep Adaptation‘. And a book by David Wallace-Wells called The Uninhabitable Earth.

I was curious to find out if other yogis shared my concerns. So, I facilitated a forum called ‘Climate Yoga: What Can You Do?‘ at the Ekam Festival in Bonny Hills, NSW.

Concerned about the amount of carbon emissions generated by long-haul flights, I put off flying to the U.S. this year, . Then, I discovered there’s actually a phenomenon called ‘flight shame‘. It stands for the guilt generated by the environmental effects of flying.

Now, nearly at the end of 2019, I need to get myself off the roller coaster.

I’ve landed on an action that seems aligned with dealing with my climate concerns and with my yoga practice. Simple loving kindness meditation.

You’ve probably heard of the radical acts of non-violence being undertaken by Extinction Rebellion all around the world. Groups have occupied, blockaded and marched in major cities from Adelaide to Amsterdam.

Jon Kabat-Zinn, the American meditation teacher, has a different idea of a radical act. He asserts that loving kindness is one of these: a radical act of love. He says:

As the pace of our lives continues to accelerate, driven by a host of forces seemingly beyond our control, more and more of us are finding ourselves drawn to engage in meditation. A radical act of being. We are moving in the direction of meditative awareness for many reasons. Not the least of these may be to maintain our individual and collective sanity. Or, to recover our perspective and sense of meaning. Or, simply to deal with the outrageous stress and insecurity of this age.

Perhaps you are also experiencing negative emotions at the end of 2019. Emotions which have unsettled you. Or worse, created anxiety or even anger over those ‘forces over which we have no control.’

I recommend Kabat-Zinn’s meditation, ‘Heartscape‘. It’s a beautiful meditation to which I’m committed to doing daily. At forty-seven minutes long, you may think you don’t have time, but it is an investment in your future. It may even create the clear vision we need for navigating 2020.