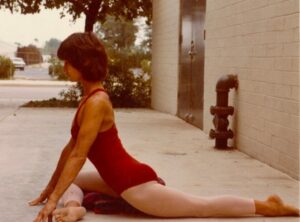 Do you like to be a beginner? At times I think that I don’t, but once I have additional skills and knowledge under my belt, it feels great.

The domain of neuroscience and neuroplasticity informs us oldies that we need to keep our grey matter fresh through on-going learning. We especially need the sorts of complicated learning that challenges our brains and creates new neural pathways.

The most transformative learning experiences I’ve had have been through the pursuit of yoga.

Being a beginner in Iyengar Yoga is still a vivid experience for me. It was mid-week October 1979. I walked into the yoga premises on the first floor of a rather run-down building in Spring Street, Bondi Junction. How could I have known I was walking into the rest of my life?

I’d heard from a friend about this mad Yorkshire man named Martyn Jackson who taught a particularly rigorous style of yoga. Because my trepidation, I never got around to attending a class until a year after I received the recommendation.

There was obviously no internet then so I couldn’t check on class availability, and I decided to just rock up. As it turned out, the class that I lobbed into was comprised of students who had recently finished a six month teacher training. I was so out of my depth. Standing poses were held for aeons with the said madman yelling at us not to come out of the pose. His voice exhorting us to “die in the pose” is still emblazoned on my cerebellum.

We did urdhva dhanurasana (‘wheel’ backbends) until I was a quivering jellyfish. We stayed up in straight sarvangasana (shoulderstand) for ages, and this pose was followed by all the possible variations. He was taking no prisoners. My only recourse was the loo, which I visited as much as seemly in a two-hour class.

Finally the session was over; the baptism for this raw beginner was complete. Like a crazy person, I promised myself that if my legs would get me up that flight of stairs the next day, I’d be back.

And then, as it happened, six months later, I got to be a beginner all over again. I enrolled for Martyn’s 1980 yoga teacher training.

Soon to Be a Beginner On the Road

By the way, in just 10 days, I’m going to be a newbie in a whole new domain–the subculture of camper trailer travellers. This is the world of three-way fridges, pressure water systems, 12 pin connector plugs, calcium batteries and multi-staged charging systems. These things live in a category I label mechanical, one that I’ve stringently avoided all my life.

But, hey, I know from experience, it will be worth it. I’m already anticipating the vision of plying the beauty of the eastern half of Australia. In only 10 more sleeps, Daniel and I will be on the road for 4 months. No doubt there will be an amazing amalgamation of yoga practice and camping. I will get to be a beginner yogini camper. 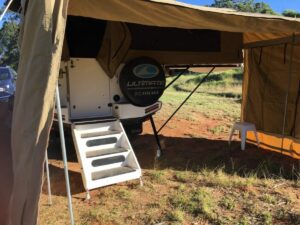 Learning the ropes: how to erect an annex