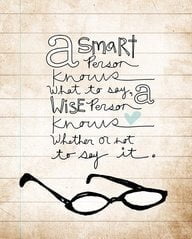 Let’s talk about talking. You know the great Aussie expression, ‘he could talk under water’, or even better, ‘he could talk under wet cement.’
Loquacious individuals can be entertaining at times, but they can also be as exhausting as a spin class at the gym. I find voluble people most tiring when they talk mainly about themselves.
A friend of mine who is a masseuse says that she feels like she’s failed in her craft if her client keeps up a line of patter through the whole session.
I feel challenged when I teach to a group of chatty students. But I know that banter can be quite a good pressure valve in class , especially when the work has become intense.
A few years ago, I learned an expression that I still am inspired by: the anagram for it is W.A.I.T. – Why Am I Talking?
So often, we do run off at the mouth. It can happen as a result of nervousness, or more to the point, because we’re afraid we’re not going to be seen or understood. At these times it pays  to pause, pull ourselves up and see whether what we’re saying is a contribution to our listeners.
As an experiment, see what happens when you say less, particularly if you are the sort of person who is continuously talkative. It may feel risky. I remind myself to shut up from time to time when I’m teaching, to allow for the students to consolidate their postures. I admire a yoga colleague who conducted some of his restorative classes with the barest minimum of verbal instructions, so his students could become more introspective.
In the United State, legislators use a procedure called a filibuster which lets them obstruct the passage of legislation by ‘talking a bill to death’.
As teachers, I think we need to make sure we aren’t talking our students to death –  to the point where they are no longer connected with their own internal process, which is the point of yoga practice, isn’t it.