When in Yoga, Speak Sanskrit 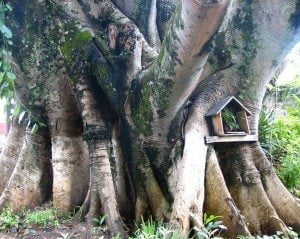 I frequently post programs of yoga poses on this blog, and I have had much positive feedback from sharing these sequences.
In the main, I use the Sanskrit names of poses because I consider those terms the language of yoga. In my classes I use both English and Sanskrit names interchangeably because it seems the students respond better to their own language. And, as yoga teachers, we want to make learning accessible.
Still, I do love the entomology of words, and there are many of our English words that are related to the Indo-European ones. “Supta” of Supta Virasana, reclining hero pose, is redolent of “supine”. “Janu” of Janu Sirsasana, head-to-knee pose, is like the Latin “genu” of genuflect. Even the word yoga itself, we know to be similar to the English word for “yoke”.
The names of poses in Sanskrit are steeped in Indian mythology, as in the story of Astavakra. His name translates to Crooked In Eight Places, and is associated with the posture Astavakrasana, a difficult and twisted pose. Or the story of Virabhadra, Siva’s stalwart war lord, who gives his name to not just one but three of the standing poses.
Sanskrit names of animals, shapes, and objects are symbolic and give us the opportunity to explore the metaphoric link between the poses and the energy of the symbol. The gesture of anjali mudra is so much more meaningful if we understand its meaning as being “a gesture of reverence” or “a benediction”, so our “Namaste” is infused with good will.
It may be for you a different kind of stretch to learn the Sanskrit names of poses, but it is a worthy use of your time and brain power. Asanas become powerfully animate and themselves act as teachers when we simply access the myths and wisdom contained in the stories behind them.