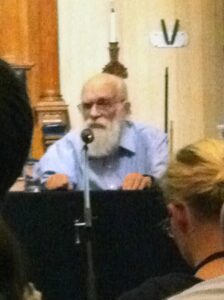 I’ve spent 2.5 days in the company of 600 or so skeptics. They came from all around the world and gathered together at the Masonic Centre in Sydney to hear inspiring and interesting presenters speak on topics ranging from “Evidence Based Medicine” to “The Spread of Creationist Teaching in Schools”.
Skeptics are fighting the good fight in Australia. One of them pictured below, in her retirement, decided to take on some of the woo-woo practitioners that she ran across when she was battling cancer in 2003. These were people who professed being able to help her or cure her by means of selling her expensive, dodgy products. As a result of her collaborative work with her G.P., she took on the Government, and they created a web site so people could make more informed decisions about their health.
James Randi was the darling of the conference, although he would be very amused to be labelled as such. He seems alternately to be amused or annoyed by people who show up as flabby thinkers. His neocortex has been honed to extreme sharpness over his 82 years. He is the spearhead of a foundation dedicated to the research and investigation of quackery. His style is funny, lancing, and effective. I didn’t get to see him in his role as amazing magician, but apparently he is a top-notch performer.
Someone asked me if I’ve converted to being a skeptic after my weekend exposure to the movement. Sadly not.
I don’t really like to be put into a box, which is ironic, I suppose, because I am the yoga teacher to so many people.
I found it fascinating, though, that so many of TAM participants were all doing this event together and had travelled great distances to get to it, but when there were social activities and breaks, they tended to hang out singly or with their electronic friends: iPhones, iPads, laptops, and movie cameras.