Coincidental with IWD, my Australian Yoga Journal arrived in the mail today, with a surprise. There was Nude Yoga Girl on the cover, a woman whom I’m told prefers to remain anonymous. If you want to see the full cover, you may need to do it in person.)

Here’s a quote I came across yesterday (apparently it’s the star that Julian Assange steers by). I like it very much and thought you might too:
If you want to build a ship, don’t drum up people to collect wood and don’t assign them tasks and work, but rather teach them to long for the endless immensity of the seas. […] 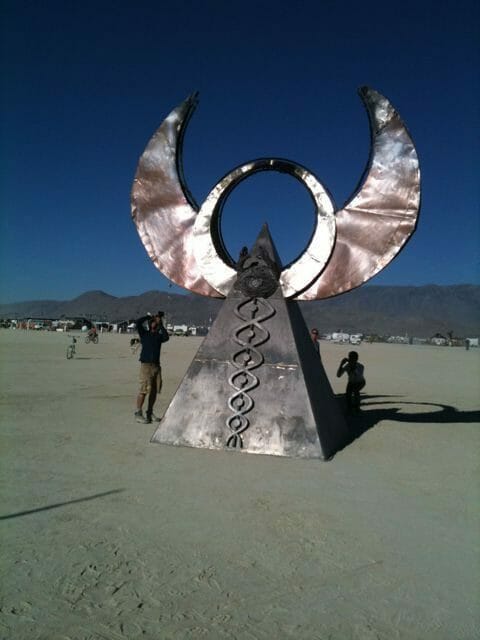 It’s sunrise in this flat, white-dusted desert, and the car we’re getting a lift with from Burning Man to Reno is stuck in a queue. We’ve been advised it’ll take 30 min. to get out, much better than the 3 hours it took to get through the entry point a week ago.
I love the desert. […]

Last night was the ritual of burning The Man.
We arrived at The Man site and took up seats on our blanket right in the front row, waiting for the fire show to start.
First there were marching bands. Have you ever seen a fiery tuba or flaming kettle drums? Setting a wild rhythm, the flame-throwers, eaters, twirlers, dancers appeared next, certainly the biggest pyro show I’ve ever seen. […]