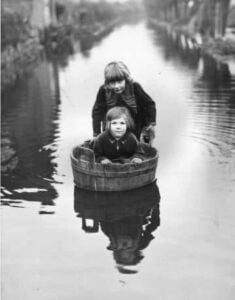 Up in our house, safe on a hill, we watched as Farmer John’s next-door paddocks became inundated. John had seen the flood coming and moved his cattle to safety. That day, it rained and rained, everyone calling it biblical. At 4 am, the caravan park at Manning Point was hit by a flash flood. The proprietor shook the van occupants out their slumber and some, still in p.j.’s, made a run for high ground.

Adam at the General Store couldn’t get to his home, just 5 minutes down the road, so decided to keep his business open. He served evacuees until his stocks ran low.

The next day The Islands Community FB group put an APB regarding the 30 cows and 10 calves on Fig Tree Farm that were in strife. A couple of stalwart neighbours waded into the billabong where the cattle were stranded, then spent several hours herding them to safety.

Manning Point became isolated and declared an evacuation centre. I heard helicopters flying over on their way to drop off supplies at the Bowling Club. A  neighbour who’d been going house to house knocked on our door, asking if any of us needed medications. Then, she relayed information to be added to the island’s next helicopter deliveries.

Sadly, one elderly resident from Manning Point became ill. A medivac helicopter soon came to pick her up and transport her to John Hunter Hospital in Newcastle. I found out later that she didn’t live. Neighbours spread the word that her husband who was still at Manning Point would be needing tender support.

The bowling club served daily BBQ breakfasts. And at the eleventh hour, seemingly appearing like a genie out of a bottle, the volunteer Sikhs’ food truck arrived. Rumour had it that they’d driven up from Victoria with their delicious vegetarian curries–‘food for the soul’. When they left Mitchells Island, they drove to Oxley Island to feed the farmers there, some of whom had lost everything.

What does it mean? 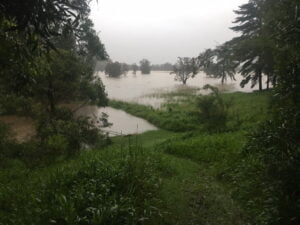 Wiki tells me that ‘the creek don’t rise’ is an American slang expression that implies that our best intentions can be thwarted by uncommon events. Similar to what we’ve experienced in the Manning Valley, this supposedly once-in-a-century flood.

We on Mitchells Island are just a microcosm of a terrible devastation that has cut a deep swathe across NSW. Walking through our nearest town today, I saw the proprietor of a beauty salon sitting on Albert Street in a chair that she’d pulled out of her flooded premises. She was holding her head in her hands and crying. That seemed a response that was congruent with what she was facing.

We in Australia on the eastern seaboard were terribly hurt by the fires of 2019. Terribly hurt. Is it at all possible to recover from such profound losses of property, homes, livestock, businesses?

I don’t know. Perhaps. Maybe what will save us is a compassionate caring that is proportional to this disaster. Maybe our definition of family needs to become more extensive and our hearts more expanded.

In my walk around Taree today, I nodded to people and said good morning and got genuine friendly responses from ‘strangers’ in return. The devastation we’ve experienced shows just how vulnerable we humans are and how very much we need each other.