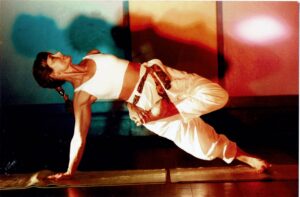 Personally, I think it is necessary to celebrate special days and meaningful anniversaries. I try never to let a family member’s or friend’s birthday go unacknowledged. Imagine your life if that special person hadn’t been born. And, it is such an easy thing to make a phone call or send a message. Besides, whether you like Facebook or not, it will remind you.

And so, with this post, I’m acknowledging and appreciating the fact that I have attained 50 yoga practice years.

This is often the way a seed is planted for future yoga teachers. We are inspired by a teacher. As I listened to Dorothy, something stirred in me. I saw a glimmer of hope in Dorothy’s story–the possibility that health, happiness and even longevity could be mine.

That first yoga class was so much fun for me! Dorothy did something that as a yoga teacher now I would never do with a raw beginner. She encouraged us to stand on our heads. Up I went. I stayed up with perfect balance. The tumbling child and teen-age gymnast in me came alive. If the truth were told, so did the show-off. It was going to take years of yoga practice to tame the attention-seeking me.

However, in the beginning especially, I discovered doing physical yoga was something I could shine at. I needed that confidence boost.

Then I did something that I’ve rarely heard any replicate. On 3 x 5 cards, I wrote down stick figures of poses from the book, along with their names. Then, I was able to put the cards together in different sequences, although I wouldn’t have called them that at the time.

That was it. I was off and running, so to speak. Through thick and thin, major surgeries, cross-continent moves, marriage break-ups, and all the stages of a long life, yoga has been my constant companion.

Has my practice changed? Of course! And that is the absolute beauty of yoga–its breadth and depth and malleability. If you’d like a peek at what my practice is like now, check out this link.