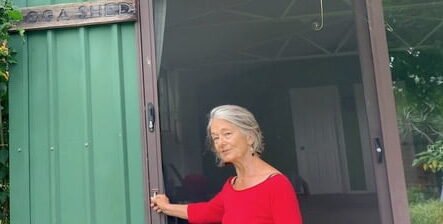 A yoga studio is a sanctuary

In these ‘corona times’ we’re living through, I’m newly appreciative that I have a dedicated space for doing yoga practice. It’s made me think about what the special allure of a yoga studio is.

Students have been coming to the Yoga Shed on Mitchells Island since 2010. I don’t know how many have passed through the door. Many students have stayed. Some have gone on to be yoga teachers.

This is my 5th yoga studio. There were three different Sydney Yoga Centre spaces: Haymarket, Riley Street and Crown Street. After these, I founded Simple Yoga in Crows Nest. Now we have the Yoga Shed. Each studio has been imbued with its own life, energy and charm.

The corner of Ultimo and Thomas Streets, Haymarket, was also the premises for an acting school. Most nighttime yoga relaxations would be underscored by the actors playing music downstairs. They might play ‘Black Sabbath’, for instance, so loudly that the floor boards vibrated.

Riley Street was quieter and quaint. The building featured dormer windows decorated with wooden gargoyles. The ceiling in the yoga room was low. A tall person could do a handstand at the wall and their feet might touch the ceiling.

We came into our own at Crown Street. A former printing business, we did a major renovation that blended the buildings heritage features with modern comforts. High ceilings, ample space and natural light made for a soothing and welcoming space. Sydney Yoga Centre became a community hub for the ‘creatives’ of Surry Hills. We ran five yoga teacher trainings there.

Simply Yoga, like the other studios, had an inner city vibe. And similarly to the other spaces, once you entered the yoga room, you felt safe. You could leave the busy-ness of the outer world behind to spend time with yourself in peace.

The magic of the Yoga Shed

The Yoga Shed sits in a semi-rural setting with distant views of the river. I think that the yoga class begins as students walk through the gardens. To see the colour and variety of growing things is a meditation in itself, a joyful one.

The entrance to the yoga studio is framed by two mature bougainvilleas–one pink, one saffron. A water feature is almost out of sight but can be heard bubbling along. It will be a background sound in the yoga relaxation.

The room is an open space in what is really just an old green shed. It’s been tarted up with carpeting and is overflowing with props. The obvious ones are bolsters, blankets, blocks, straps, mats. There are less common props, too. There’s a yoga swing, a wooden trestle and a big whale-shaped backbender.

A month or so ago, a dozen students would fill the space for the Tuesday morning class. There was magic in being able to look around the room and see neighbours’ and friends’ faces. We would finish the sessions with the traditional ‘namaste’ and feel each other’s goodwill. Every time we would meet, we built on that goodwill to form deeper bonds. We would water the garden of community.

At this time, I love the generosity of yoga teachers in offering our classes online for free.

But let me just say that this parenthesis in time is definitely temporary. There’s nothing like an in-person community. And my heartfelt wish is that we get back together as soon as possible.

In the meantime, your mat is your yoga studio. You can create your own sanctuary every time you roll it out and get on it. When you finally do come to classes again, your relationship with yoga will be deeper and more personal because of your constancy.