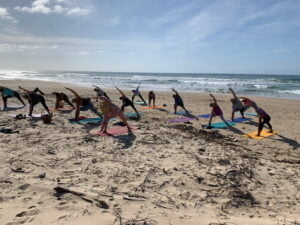 The virus: a parenthesis in time

It’s called self-isolation by government bodies, but it could be described in other interesting ways: seclusion, severance, reclusion, retirement, separation. My thesaurus has offered up a poetic word, ‘caesura’, a break or pause (usually in the middle of a verse line). I like the expression, self yoga retreat.

This was the first week of what I’ll call ‘Corona Time’ when I was not teaching yoga. Not because of holidays or my being ill, but as a community service. I didn’t want to stop, but in talking it over with my dear husband, I arrived at, ‘this is the right thing to do.’

I wasn’t the first yoga studio to close, but I think I was a week ahead of most of the ones I know. I couldn’t quite stop, though. I thought, ‘what would be the harm of a pop-up class on the beach?’ I did it. I led a morning session last Sunday at Main Beach, Old Bar.

But that was yesterday and things are changing so fast. I now know that it’s time to stay closer to home. Not quite shelter-at-home, as has happened In San Francisco and other major U.S. cities. But that may come tomorrow or the next day in the Manning Valley. There’s an expression widely used during the 2019 bushfires: this is all unprecedented.

At first I thought of my time-off as a self yoga retreat. I was going to do more yoga practices, weed the garden, organise the garage, practice my choir songs and certainly clean off my desk. I was going to ring, email, text friends with whom I’d been out of touch.

You can see where I’m headed. I did bits of all those things. In between, I likely did too much, too often, looking at FB and the news. One thing I did was clever. I kept a concise diary of what happened in the first week of my yoga retreat. Despite not doing all I wanted, I accomplished a few important things with the help of my tech savvy husband: 1) we made a youtube video class, 2) we promoted my revised ‘Teach Yourself Yoga’ book, 3) and I practised good self-care (rest, exercise, diet).

At this time, I and those in our household are well. I won’t be giving up my avid following of the news, mainly because I know so many on the planet are not well, are in fact dying. It’s my reality check. More important for me, it’s a way of holding all those people in my heart.

Come to think of it, that’s a pretty good benefit of a yoga retreat in these uncertain times…opening one’s heart.