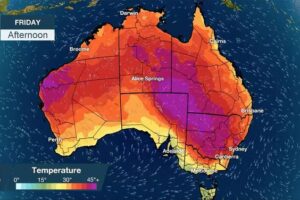 It’s a gorgeous day here on Mitchells Island–twenty-five degrees c. (80 degrees F.). The wicked winds of the last weeks have mostly abated. And best of all, there’s been a moderate amount of rain over the last week.

Another day in paradise, you could say, and you’d be partly right. Except for the fact that it has rained so very little this year that we are on water restrictions on the Midcoast. Much of Australia is in drought. There have been record-breaking temperatures. January’s heatwave continued into February. One day at the end of 2018 registered the hottest day ever on record for nationally averaged mean temperature–40.19C.

A 2017 The Guardian article puts things into perspective:

Climate hotspots intersect, and nowhere will we escape the changes taking place. What happens in the Amazon affects West Africa; the North American growing season may depend on the melting of Arctic ice; flooding in Asian cities is affected by warming on the high Tibetan plateau. And urban areas ultimately depend on the countryside.

What’s an old yogini supposed to do if extreme weather is becoming the new normal.

The planet is heating up. The oceans are warming and sea levels rising. Perhaps all of us are in a hot spot now.

It’s a beautiful day, or is it?