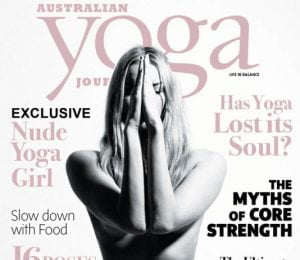 Coincidental with IWD, my Australian Yoga Journal arrived in the mail today, with a surprise. There was Nude Yoga Girl on the cover. (The above photo from the AYJ website only does half justice to NYG, a woman whom I’m told prefers to remain anonymous. If you want to see the full cover, you may need to do it in person.)

On this International Women’s Day and with the magazine’s impetus pushing me forward, it seems a perfect opportunity for me to come out. To bare my soul, so to speak. Here goes:

1. Occasionally, I will practice yoga in the nude. Not often. Sometimes it’s not always that comfortable. But maybe in the future, global warming will propel many of us into this liberating way of practising.

2. I have participated in a nude yoga class…at the Burning Man festival. Our instructor ran regular nude yoga classes in New York. He might have been avant-garde in 2009, as these classes have apparently popped up in many places Google reports.

3. I have attended clothing optional Human Awareness Institute workshops since 1992. I highly recommend these workshops for their positive message about body image and sexuality.

For me, and others I know, the workshops deliver on the claim below:

Being naked with others in a safe non-sexual environment provides a rare opportunity to quiet the negative voice about our bodies, and stand simultaneously in our vulnerability and in our power, reclaiming for ourselves our own unique beauty and clarity that we are loveable exactly as we are.

4. Finally, I have been in a nude photo shoot, my own. When I turned sixty, I had a series of mildly sexy photos taken. When my friend/photographer David Clare finished the shoot, I asked him to take some photos of me in nude yoga poses.

This is the last one in the series, not quite naked, but certainly bare-headed.

Just a nod to my feminist leanings…. As I wrap up this post, I find myself wishing that Nude Yoga Girl would call herself a woman.