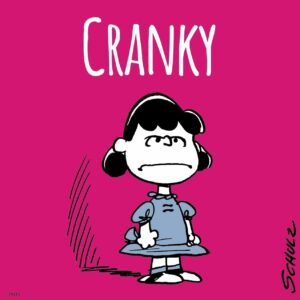 I’m going to throw a theory out there and see what happens.

My theory is that as people age they exhibit more grumpiness and dissatisfaction. Remember the television series Grumpy Old Men, which featured some well-known men discussing modern-day stuff that irritated them. The series was popular enough that it spawned Grumpy Old Women, and then they were all together for Grumpy Old Holidays.

I live in a household of six where we are all ‘getting on’. Our ages range from 67 to 74. We three couples have been living together since 2006 and we know each other well. Our communal living situation has been described as a sort of social experiment for retirees. Any of the many conditions that relate to ageing are happening right under our roof, in the laboratory of our co-habitation. It makes it a good place for me to make my observations and formulate my theories.

In fairness, I can only talk about myself. At this stage, I wouldn’t go so far as to call myself a curmudgeon. That’s a term used almost exclusively for crusty, cantankerous old people. That’s the far end of the spectrum.

I think what’s happened as I ambled through my 60’s but has become more pronounced in my 70’s is that I am less tolerant. Little things can trigger larger reactions these days. For instance: I’m the one who empties the dishwasher for two days in a row. On the third day, I open the dishwasher full of clean dishes and am annoyed that I might have to empty it again. Another scenario is, I’m weeding in the garden and pruning the shrubs . Then, I go to find the wheel barrow but it’s not in its usual place. We have an acre of gardens. I have to wander all around to find it, and it could be anywhere.

The problem as I see it (when I have enough clarity to do so) is the assumptions I make. The most fundamental of these is assuming a level of meanness or insensitivity on the part of the other person. In other words, I take it personally. Ninety-nine times out of a hundred, and maybe more, this is a wrong assumption. More than likely, there’s been an oversight or a bout of forgetfulness. Forgetfulness, for sure, is happening around our place more and more. This is all the more reason for me to be forgiving, even when there has likely been no trespass.

I realised yesterday that the thing that helps me most to put a little wedge between my assumptions and the imminent arrival of the black cloud is meditation. And, guess what? Over the last two months my regular meditation practice has languished. This morning I was back in it with fresh motivation.

That’s the thing. When stuff comes up, when we lose our way, trip and fall, the pain of it will create the incentive to do something. Some people might opt for therapy. Others might have spiritual practices. For my money, there is no more profitable activity than meditation.

I’d love to hear from you, dear reader, what you think of my theory and what you do when the dark cloud comes over you. Here are some suggestions from Lifehacker —10 Ways to Beat a Bad Mood.