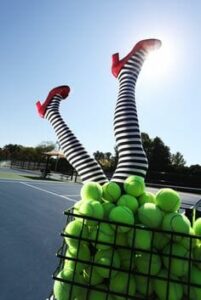 What kind of crazy person would jump out of bed on a Sunday morning at 8:15 to play tennis? To flesh out the picture a little more, today’s forecast predicted a high of 34 degrees. Without a cloud in the sky. High humidity was going to add another layer of discomfort.

This crazy person (me) is passionate about playing tennis. I learned the game when I was a young teenager and played consistently for years.  Then, when I was diagnosed with osteoarthritis of the hips I had to stop. This condition sidelined me for nearly 20 years. Now that I have new prosthetic hips, I’m back on the court.

I like the game so much that I talked Daniel into taking our racquets and balls on our camping trip. We travelled all around the eastern half of Australia, carrying our gear. Sadly though, the proximity of a tennis courts and favourable weather conditions didn’t coincide. We never got to play on this trip.

Tennis is an amazing game for revealing self-talk, those detrimental conversations that occur subliminally. Conversations that sabotage your game. There’s actually a dead simple formula for winning. All it takes is to get the ball over the net and into your opponent’s court one more time than them. However, if this simple technique doesn’t work, you might end up being a tad upset. Either with yourself or your opponent. You might silently judge yourself. You might mutter under your breath. You might even employ audible, angry epithets.

I know that I’ve done all the above behaviours. For the most part, bad manners and language make for bad play. We’ve seen this happen many times in the grand tournaments around the world. Try googling, Tennis’s Bad Boys and you will see a list of ten of the worst. (And, Nick Kyrgios isn’t even on the list.)

One of the things I love about the game is the way I so frequently catch myself in the act of negative talk or thinking. Each ‘I’m so stupid’, or ‘How could I have missed that shot?’, or ‘Another double fault, #$@&%*!’ is an opportunity for rebooting the network. An opportunity to wake-up to the present moment. Without static, without the interference of derogatory dialogue.

In the present, I can come back to pure observation. I see where my feet are placed. I notice where I want to place my shot. I know if it’s risky to go to the net. What I’m describing is not the aspect of tennis that is physical prowess or speed. It’s mental training.

Off the court, off our yoga mats, the blah-blah-blah is going on all the time, just below the level of consciousness. We’re a little sleepy about it, and we end up tripping over it.

Tennis is brilliant because it’s all happening so vividly that you can catch yourself in the act.

So, maybe this tennis yogini is not so crazy, jumping out of bed to spar with my opponent. That constant opponent, the one that is always trying to get the upper hand–my mind.