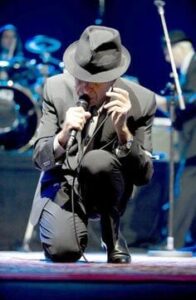 This past week two sad things happened. To spare you any further U.S. election angst, I’ll refer to only one of them.

The incomparable and inimitable Leonard Cohen passed away.

The media has heaped so much praise on this legend of music that I don’t need to add more words. He was always so accurate and sparse in his language. I’ll try to emulate.

I want to talk about the ways in which he touched me.

Several years ago I saw Leonard in concert in the Hunter Valley. He must have done similar performances countless times around the world. And, his audiences would have known almost every word of his songs. Yet, when I saw him, he and his musicians performed in a manner utterly fresh. All of the music to the highest standard.

But what stood out for me were Leonard’s humility and his presence.

He frequently and warmly acknowledged his band and backing singers. We came for him, but by the end, we loved them, too.

Well into seventies, Leonard seemed as flexible as a young yogi. He got down on his knees to defer to his old guitarist. He skipped on and off stage. He bowed often and reverently.

We, his audience, were in the palm of his hand. Enthralled for two and a half hours, I still carry the imprint of sharing that night with him.

Like the great acharya, Krishnamacharya, Leonard Cohen knew his end was coming.  And, like any wise person, he knew that it was important to have completed his journey. To have shuffled off the planet with no loose ends, no regrets, no blame.

For the last act in the play of his musical life, Leonard created ‘You Want It Darker’, maybe his finest album. It is certainly dark, but, hey, so is death. So, be open-minded. Have a listen. Rolling Stone magazine summed up this final album as ‘grim, spiritually radiant and deeply poetic.’

I believe that as part of Leonard’s last act, he offered us a thoughtful beacon. One of his album’s refrains is the Hebrew word, Hineni‘, Here I Am. As death is inevitable, let’s be ready to go. Be as complete as that wise old guy.