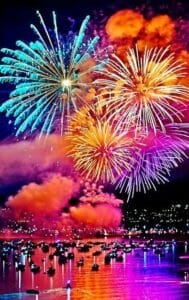 New Years: All the Time in the World?

Does my ‘time is running out’ title for this post sound like a doomsday saying? I don’t mean to scare anyone. But, I was up in the night ruminating about time, thinking about the end of 2015 and this brand new shiny year in front of us.

We’re led to believe with all the fireworks displays and midnight horns and whistles that Something Important has happened in the switch over from 23:59 to 12:00, 2016. Really, though, all that happened was the march of time–inexorable and implacable.

What occurred to me in my nocturnal musings was how the imaginary line between this year and last throws up a great opportunity. Even though this is the start of a new year simply because there’s much agreement on it, we can agree to make it special. We can have this new year be alive with possibilities.

Ironically, what makes this moment, this day, this year special is the background fact that time is running out. I can hear that as a good thing, a reason for wringing the most out of now.

I came across a beautiful book long ago called A Thousand Moons: Krishnamurti at Eighty-Five. The title indicates that if one moon is one month, a thousand them equals around eighty something years.

The Australian Bureau of Statistics charts tell me that a woman in this country will live on average to be eighty-two years old. That’s pretty darn close to one thousand moons. I reckoned my remaining number of moons, weighed them against Australian averages, and the result is I have a little more than 138 left. Better make the most of them!

It’s just an interesting way to think. I might beat the averages because of my yoga regime, healthy diet, and living the rural life, but for everyone of us there are just a finite number of moons. Mostly, we don’t really know how many.

What to do with the fact that time is running out? I can think of a few practices to make the most of those grains in the hour glass.