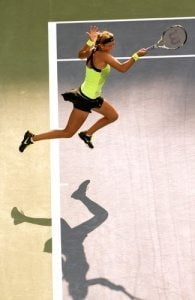 The Challenge of Tennis

Daniel and I played tennis the other day. So, what’s unusual deal about that?
I haven’t played tennis in maybe 15 years. It was too painful for me to play when I had hip arthritis, so I stopped. During the period that I was suffering, I stopped riding my bicycle, too. I didn’t do much bush walking. I let other people do the heavy lifting. You get the picture.
Little by little, the list of physical activities I could participate in dwindled until yoga became my last refuge. I thank all the Goddesses that I had yoga and yoga teaching. They were there like trusty companions right up until I underwent bi-lateral hip surgery. And then almost immediately afterwards, yoga was there for me again.
I adore tennis. I’ve played since I was a teen-ager. As adolescents, my sister and I would go out into the street in the summer evenings and hit balls. Playing in an unfenced area, you get really good at keeping the ball in play. Especially when the Tucson temperature at 7pm was a hot and sweaty 30 degrees.
Here’s something that doesn’t quite add up for me. It would seem that everything was against Daniel and me having an enjoyable tennis experience.
The temperature was over 30 degrees. There was no shelter from the midday sun, and there was scarcely a breeze. Daniel and I had to hire balls and racquets because our equipment was in disrepair. The rented racquets and balls were inferior but we made do. We forgot our water bottles, played badly and discovered our fitness was not good. We finished 10 minutes before our hour was up, sweltering and breathing hard.
Yet, I had the best time, and I can’t wait to get back to play again.

The Challenge of Yoga

The tennis experience reflects what happened in my first Iyengar yoga class. It wasn’t a beginners’ class in any shape or form. It was comprised of students who had just finished a rigorous 6 month teacher training. The teacher, Martyn Jackson, ordered us around like a drill sergeant. I remember doing 25 urdhva dhanurasanas (wheel poses) where we were exhorted to hold each one. I thought I was going to die, but I also felt I had to keep up with the others, so I did.
Did I mention the class was 2 hours long?
I vowed that, if I were in good enough shape to walk up the stairs to the first floor premises, I would return the next morning. And so I did.