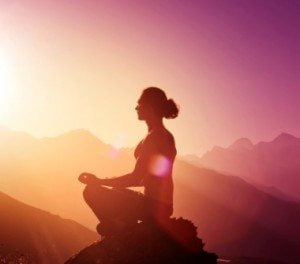 When I was rather new to yoga, having just completed a 10 week YMCA beginners course, I moved to southern California. I was keen to find a yoga teacher and, in the seventies – way before Google searches – how to do that was to check out the local newspaper classified section.
I discovered Joan in a small ad that mentioned yoga, so I rang the phone number. Joan seemed friendly enough so I booked for a private session to see if I liked her in person. At that time, I was an ingenue in the realm of yoga and fairly open-minded, so I just took on Joan’s style of teaching without much scrutiny.
Joan was a full-bodied woman, confident and articulate. She looked Jewish to me, but I later found out that she was a member of a church called Religious Science. In my first lesson, we did a little bit of stretching, but the main program was something I’d never encountered called visualisations.
I had a hard time paying for private lessons as I was unemployed, but Joan kindly lowered her fees and we shortened our session to just a half hour and somehow I managed.
Using visualisations as a method of working with the mind is probably more commonplace now than it was back then. We see it as a healing method in many alternative therapies but also in medical circles, where it is known as guided imagery.
In the end, I didn’t stay with Joan’s type of yoga. I became nervous about subliminal messages coming through from her religious background. More to the point, I wanted a physically oriented approach to yoga, and years later I found what I wanted when I learned the Iyengar method.
What’s really interesting though is that I use imagery constantly when I’m practising and teaching yoga. Through my studies of anatomy and physiology, I picture and sense exactly how my body works in each pose. In the classroom, I ask my students to visualise their shoulder blades or kneecaps or sitting bones to help them connect body and mind.
Sometimes, I’ll ask the students when they are in a supine position to close their eyes and picture the whole of the pose I’m teaching before doing it. Having done a mental dress rehearsal, they are more aware when they actually perform the pose.
I heard after I’d moved on from Joan’s teaching that she studied to become an Iyengar teacher. I’m sure the visualisations she practised created a great platform from which to practice and teach the rigorous style of BKS Iyengar.
For information on some of the ways visualisations are expressed in yoga and other practices, read Dr. Timothy McCall’s American Yoga Journal article.