Do You Compete in Yoga?

I think I’m getting there finally, gradually – that is, being non-competive, in my yoga and in my teaching.
It’s taken a few knocks on my head along the way: years of dealing with osteoarthritis and a couple of rounds of major surgery. And also starting all over as a country yoga teacher where I was an unknown and yoga was a foreign language to my new students.
It’s so often the case, isn’t it, that the gifts we don’t want are the ones that serve us best?
In recent times I realised I was trying to compete with my husband and the people I live with for time, attention, air time…. I kept wondering why I was feeling dissatisfied, and I attempted to pin it on somebody, something. I’m doing better at letting others have their space.
Here at Bellingen, I had another great day in my printmaking course, being nobody and connecting with everybody. Last year, in the same class, revved up for being the greatest, I felt isolated and unsuccessful. Here’s a little print I did today: 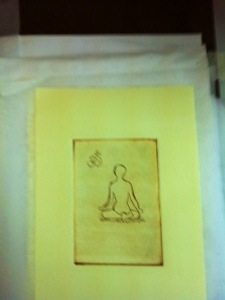 There have been some terrific prints done by others so far. It’s been fun to walk around in my nobody-ness, admire them, and see what I can learn.