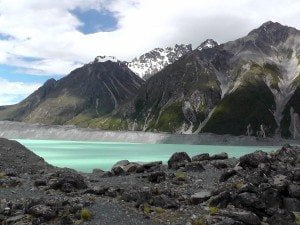 I learned a little science lesson while visiting New Zealand’s South Island glaciers. While the region’s scenery is often undeniably beautiful, I found the turquoise mountain lakes and streams to be altogether breathtaking. It’s difficult to drive from Point A to Point B without frequently stopping for photos and filming.
Interestingly, it’s not the clarity of a lake’s water that creates the special colour, but rather finely ground rock from the glaciers that’s suspended in it. The substance is called glacial rock flour, and it’s the scattering of light through the water that creates the turquoise colour. However, the glacial sediment gives the water in rivers and streams a distinctive milky, cloudy hue.
The great yogis of yore applied themselves to getting rid of the sediment of the mind. The citta vrtti described in Sutra I-2 create eddies in the mind that act as a filter over our essential being. What accounts for these distractions? Our attachments and conditioning. How do we eliminate them? By stilling the mind.
Georg Feuerstein* says of meditators on the cusp of self-realisation that their consciousness has become so translucent that its transparency approximates that of the Self and liberation is secured.
*The Yoga-Sutra of Patanjali, a new translation and commentary.
Tatakam sarvavisayam sarvthavisayam-akramam ceti vivekajam jnanam
Such clarity is not exclusive of any object, any particular situation or any moment. It is not the result of sequential logic. It is immediate, spontaneous and total.**
**Patanjali’s Yogasutras, translation and commentary by T.K.V. Desikachar.