I love my iPhone. I was an early adopter. Not because of any nifty apps I could get, of which there were few and far between back then. But I just loved the way the iPhone could display photos, and, lord knows, I have a lot of images.
I am not a luddite. I wonder, though, whether all the screens we view all through the day are serving our health. Computer monitors, mobile phones, iPads, Kindles, notebooks, television and movies can be useful and entertaining, but also tremendous distractions.
When you go to an Indian restaurant, for instance, can you focus on your friend or spouse if there is a Bollywood spectacle running on the big wall screen? Do you stop the task you were doing when your phone sounds a tone as each email, text message, or tweet arrives? My surfing friend/student, makes fun of Daniel and me when he sees us walking on the beach listening to an audio book (via splitter and two ear phones). Are we in the world of the book, or in the moment, with sea spray, lapping waves and soaring eagles, or are we somewhere in between? 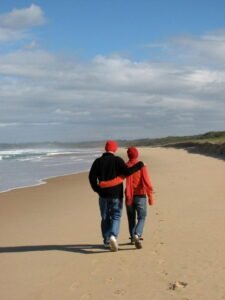 I don’t have an answer or even a hard-and-fast opinion about the notion we are going to be mutating into a species with micro attention spans.
I know yoga has some practices to counteract distractions and lead to deep concentration, meditation being the premier one.
Here’s a little story Satyananda Paramahamsa tells in Four Chapters on Freedom:

When Swami Vivekananda was in the U.S.A. in the late 1800’s, spreading the yoga word, he used to borrow several books from a library every day and return them the next day. The librarian, wondering if so many books could be read in a day, wanted to test the swami. To the librarian’s astonishment he noticed that the swami remembered every word and line that he had read.

Patanjali’s Sutra I-40 explains how the swami’s feat is possible:

So the yogi gets mastery over all objects for meditation ranging from the smallest atom to the infinitely large.*
T.K.V. Desikachar unpacks the sutra even more: “When one reaches this state, nothing is beyond comprehension. The mind can follow and help understand the simple and the complex, the infinite and the infinitesimal, the perceptible and the imperceptible.”**
Time to shut down the computer and head for the meditation cushion….
*Four Chapters on Freedom, commentary by Satyananda Paramahamsa.
**Patanjali’s Yogasutras, an Introduction.